Could the Saudis Blow Up Their Own Oil Infrastructure? 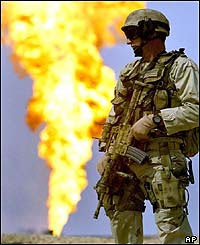 Frontpage Magazine features a fascinating article by Daniel Pipes. The topic: the possibility that the Saudis have booby-trapped their oil infrastructure to prevent anyone else from taking control.

In what sounds like the far-fetched plot of a Bond film, Pipes describes Gerald Posner's new book about US-Saudi relations. Posner, the investigative reporter and author of ten books, reportedly based this assessment on a variety of "intelligence intercepts". Supposedly spurred on by veiled threats from the US State Department during the oil crush of the 1970's, the Saudis came up with their own plan to repel any would-be takeover.

Pipes: Will the Saudis Blow Up Their Own Oil Infrastructure?

at 12:25 PM
Email ThisBlogThis!Share to TwitterShare to FacebookShare to Pinterest