A captivating story that is built to last 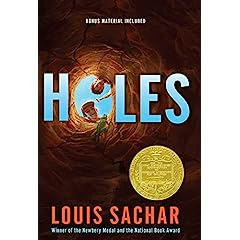 Ever since its publication in 1998, my kids have been after me to read Holes. Winner of the John Newberry Medal, Sachar's tale is an adventure story, tall tale, and coming-of-age saga wrapped into an elegant, symmetric package.

Stanley Yelnats is an overweight geek whose family has had a run of bad luck... for the last four or five generations. So it only seems inevitable that Stanley is wrongly accused and convicted of theft -- for a pair of sneakers, no less -- and immediately given the choice of jail or Camp Green Lake, a juvenile correctional facility. Stanley picks the latter; after all, it's a camp and what could be more fun than that? Alot, it turns out.

To call Camp Green Lake poorly named is an understatement of hysterical proportions. It has neither a lake, nor anything green, and is about as much fun as getting zapped with a taser. Each day, in blistering heat, every camper is required to dig a hole measuring exactly 5 feet deep and 5 feet wide. But far from being a meaningless forced labor effort, Stanley begins to realize that the warden is really trying to find something. And that something is very valuable.

You'll quickly become immersed in Stanley's journey to make sense of the camp, his fellow prisoners, and his family's decades-long run of bad luck. Is it a classic? Let's just put it this way: don't be surprised if your grandkids want you to read it to them... even if that's fifty years from now.
at 9:30 PM
Email ThisBlogThis!Share to TwitterShare to FacebookShare to Pinterest