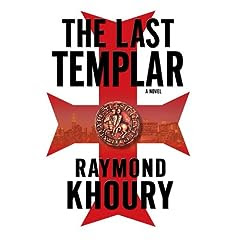 The first half of The Last Templar is a rip-roaring and unpredictable page-turner that begins with four armed horsemen invading a Vatican exhibit at New York's Museum of Modern Art. The foursome, dressed as Knights Templar, are not after gold or riches. Instead they abscond with a fascinatingly complex encryption device from the era of the Crusades. The pursuit of the device and its meaning forms the crux of the plot.

The order of the Templar arose in the 12th century to protect travelers to the Holy Land. Their wealth and reputation were unassailable until 1307, when the King of France and the Church destroyed the remaining Knights. Their intent was reportedly to absorb the Templars' vast fiscal treasures. But, in what has perplexed scholars for centuries, no such treasure was ever found. The resulting aura of mystery has followed the legend of the knights ever since.

After the raid on MoMA, FBI agent Sean Ryan and archaeologist Tess Chaykin embark on an increasingly desperate hunt. Who were the four horsemen? What was the encoding device? And who is behind the apparent resurgence of the order?

Khoury is at his best educating the reader. The history lessons, woven throughout the characters' dialogue, is educational without being the least bit dry. But what purport to be action sequences are truly the crunchy bits, to the extent that I started skipping pages near the end of the book because of the formulaic conclusion. In short, worth reading, but only if you don't have something better at hand.
at 6:30 AM
Email ThisBlogThis!Share to TwitterShare to FacebookShare to Pinterest