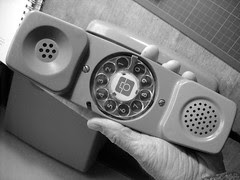 The Lippard Blog, in its qwest (get it?) to demonstrate that consumer choice exists for broadband, resorts to the most tortured example possible: the Phoenix metro area. In Phoenix, Lippard writes, nine (9) separate choices exist for last-mile services to consumers. Nine? Wow, I'm excited! Let's dissect his list:

* Qwest - the RBOC formerly known as US West offers primarily DSL service to consumers. So far, with the current state of net neutrality in place, Qwest is unable to block the use of VoIP, P2P, video streams, and other legal IP applications. We'll give Lippard credit for this one: that's 1.

* Covad - is a DSL provider that, by Lippard's own admission, uses Qwest's last-mile infrastructure. Uhm, that's not another choice for last-mile, that's a reseller who has just rebranded the RBOC's service. That's still 1.

* Cox Communications - is the incumbent cable provider. And, thus far, with net neutrality in place, Cox is unable to block services like VoIP. So this is a valid alternative and we're up to 2.

* CableAmerica - is an alternative cable provider listed by Lippard. A tiny player in cable, it has only 75,000 cable subscribers in 3 states. Oops - and it looks like Lippard missed the fact that Cox acquired CableAmerica months ago, including all of its Arizona operations! Nice try, but we're still stuck at 2.

* Alltel - a reseller of Sprint's EVDO service. Uhm, nope, for the same reasons of banned EVDO services, we're still at 2.

* Verizon - another EVDO provider who either bans or blocks services. And... yes... we're still at 2.

* HughesNet - a satellite-based wireless provider. Latency and upload speeds have always been a problem for satellite-based IP, making it a non-starter for VoIP, video collaboration, peer-to-peer and related tasks. According to Wikipedia, "Upload speeds are limited by one's dialup modem, and latency is high, as it is for any satellite based Internet." Because of these limitations and especially the inability to run VoIP or bi-directional video service, satellite is not a credible broadband alternative. Another data-point: companies that require converged voice-and-data WANs would not consider satellite a viable option. And no one is suggesting streaming HDTV HDTV over IP (corrected per Richard Bennett) using satellite. Sorry, we remain at 2.

* Municipal wireless broadband - the city of Tempe's muni wi-max offering is listed by Lippard and I have no idea why. Muni wi-max isn't available yet in Phoenix except in a choice couple of locations (as of May 9, 2006). If you're in the airport, it's an option. If not, you're probably out of luck. Uhm, we're still stuck at 2.

That's it. In fact, Lippard's list is revealing and a powerful argument for net neutrality. And it highlights the lack of consumer choice for true broadband IP services. Broadband to the home is truly a natural monopoly:

Wi-Max: not a viable last-mile option

If you're looking for freedom to use your bandwidth, Wi-Max isn't an option. The high-speed wireless service called EVDO is a vivid example. The terms of service for EVDO make it clear that when it comes to IP, well, maybe users just get the P:


Aside from that, you're free to use it any which way!

Cable resellers - out of luck

And if you're hoping for cable resellers that could provide some pricing leverage to consumers, well, we're out of luck with the Supreme Court's recent "Brand X" decision. Fred Goldstein of Ionary Consulting puts it this way:


Lippard's bogus list demonstrates that there is virtually no competition for broadband IP services. You've got two choices: cable or DSL/telco. Giving these two incumbents control of applications transiting the Internet makes as much sense as teaching yourself skydiving by jumping out a third-story window. Only one thing is bound to happen - and, when it does, it's going to be really, really painful.

The carriers must be forced to abide by net neutrality. Go to Save The Internet and take action. Today.
at 9:34 AM
Email ThisBlogThis!Share to TwitterShare to FacebookShare to Pinterest
Labels: FCC