Their Hoaxes Cry Out for Punishment

Donald Trump was mocked mercilessly by many in the media for dubbing the Russian collusion conspiracy hoax a “witch hunt” and for calling it one of the biggest political scandals in American history. Memo to everyone: Trump was absolutely correct. In fact, he probably didn’t go far enough in his description of Russiagate. It dwarfs Watergate, making it look like an amateur-league ballgame next to the big league.

If we are able to get all the facts about what actually happened in 2016 and 2017, this could very well be the biggest political scandal in American history. What if the previous president and senior officials in his administration decided to use the power of the state to spy on and “take out” the incoming president and his administration? And they did this on the basis of what? Policy differences?. There was no Russia collusion or any collusion of any type. Smart people knew that years ago.

This likely comes down to Obama and his administration trying to preserve their policy agenda, very specifically their terrible Iran nuclear deal; don’t forget Obama fired General Flynn over Flynn’s strong disagreement regarding the Iran deal and, of course, Trump’s campaign promise to undo that deal. It means, simply put, that the outgoing administration, unhappy with the election results, was trying to undo them.

You cannot think for a moment that Obama and, for that matter, Sleepy Creepy Uncle Joe Biden weren’t involved in the Justice Department, FBI, CIA and other elements of the intelligence community’s plans to take out Trump. The only real question in my mind is whether Obama merely greenlighted the plan or was, in fact, playing quarterback. Either way, as more and more evidence comes to light, it’s becoming clear this was the weaponizing of our government against a political opponent over policy differences. This was truly a case of collusion between the adherents of big government statism: powerful actors at the Justice Department with Rod Rosenstein, the leaders of the FBI with James Comey, Andrew McCabe, Peter Strzok and Lisa Page, the CIA with John Brennan and Director of National Intelligence James Clapper, all working with the Democratic National Committee and Clinton campaign, aided and abetted by their propagandists in the media. 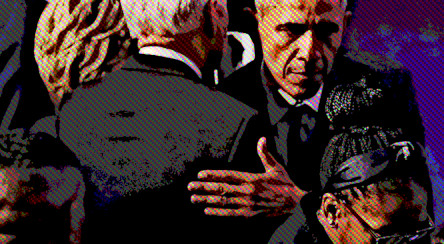 This was not a mistake. This was intentional. It was systematic. And it was a gross abuse of power. This was banana republic behavior from the Obama Administration, not something we should ever see in a constitutional republic. In our republic, we settle our policy differences like civilized people: at the ballot box, not like two-bit dictators in Third World countries.

It’s ironic to hear Obama talk about the “overturning of the rule of law” in his clearly coordinated leak to Michael “Fusion” Isikoff. Typical of leftists, he seems to think the law is whatever he says it is, completely dismissing the notion of transcendent law and natural rights. Despite the Left’s confusion, any man-made law or concept of law that is at odds with natural rights and transcendent law is no law at all.

This is what is at stake right now in this country: what do we believe about the law and the power of the state? Because ultimately it’s about what the American people believe and what they accept and what they trust.

It comes down to trust. What do we do when we don’t trust the institutions meant to protect us? What happens when you don’t trust your government and the people running it? When you think about it, everything is based on trust: our law enforcement regime, our surveillance state, our government.

The social contract theory on which our Founding Fathers based this constitutional republic holds that since men are not angels, we come into voluntary associations to establish order in society. We entrust our elected officials to be stewards of the money and power given them to establish that ordered society, and out of that entrusted power those officials have created a government limited by the constitution that embodies our consent. Every institution, in theory, should be dedicated to advancing and protecting the people’s constitutional rights. This partnership between the people and their officials is based on trust; trust that those elected will form a government that will see to the needs of its citizens, will protect them from attack, and will not infringe on their inalienable rights.

So what happens with that trust has been shattered? Everything starts to spin slowly off its axis. Perhaps the change is imperceptible at first, but over time, it becomes more obvious. We’ve now reached the obvious point. It is very hard to deny what we’re seeing: a complete and horrifying abuse of entrusted power.

So what is to be done? You can only restore trust by establishing consequences for breaking it. Painful, hard, and devastating consequences so that people watching can understand that breaking our trust results in punishment and that anyone doing such things in the future will face the same punishment.

If everything is as it seems, the Obama Administration officials, from Obama and Biden to Comey, Brennan, Clapper, McCabe, Strzok, Page, and others, were traitors to the Constitution.

By their actions, they placed themselves above our constitutional order and demonstrated that they thought they were a power unto themselves. So they must pay the consequences for it: jail time, permanent revocation of security clearances, public shaming to make examples of the players who did such damage to our republic.

To be clear, those who refuse to demand and enforce consequences are themselves guilty. They become part and parcel to the dismantling of the republic. The question is whether those in the position to enforce consequences will have the courage to push forward with those efforts. We will find out soon enough. If they do not then we will know they are complicit in the destruction of our trust because of their lack of action.

You left out public hanging from your list of punishments.
These people tried to destroy a nation!
Our nation!

It is essential that many of these people spend real time in prison and forfeit their pensions etc. They should be shunned before the public!! The fact that the obamas. Valerie Jarrett, and Holder are still at it requires their arrest SOON!

As the Obama Administration's motives, I think the author left out an overarching grand strategy - reduce the USA to a less powerful and less influential nation.

Everything I've seen over the last 20 years, and specially the last 12, has been focused on this big goal. And I suspect hostile racism against white people and religious intolerance against Christianity drives many, if not most, leftists such as the Obama team. Others, like Pelosi and Schumer, just see an opportunity for power and wealth.

The Democrats finally realized why, where ever it's been tried, Socialism destroys the country. Realizing the mistake they've been making they've come up with a new plan. This time they'll destroy the country first, then implement Socialism. They figure that way, things can only get better under Socialist rule and not worse.