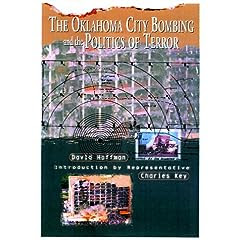 There are more startling and credible stories circulating around the death of bomber Joel Henry Hinrichs III, the Oklahoma U. student who blew himself into smithereens just outside a packed stadium last weekend.

One commentator on OU's FanBlogs notes:

And Tap Scott's CopyDesk claims to have that very same eye-witness account, abridged here for readability:

Just a suicide? Do you really need ammonium nitrate fertilizer... just to off yourself? A car idling in a garage or a .38 special would seem to be sufficient. Channel 9 News reports that Police have confirmed Hinrichs attempted to buy quantities of the fertilizer:

Okay, so he couldn't build a McVeigh-style bomb and raised some suspicions in doing so. And to reiterate the fact that it wasn't just a suicide, OU President David Boren stated:

The Enid (OK) News & Eagle boils it down to some critical questions for OU President David Boren:

If a suicide bomber detonates himself in the midwest, far, far away from New York, did it really happen?

I hear crickets chirping.
at 6:21 AM
Email ThisBlogThis!Share to TwitterShare to FacebookShare to Pinterest