The Volcker Report, the Anti-War Left Bank and Saddam 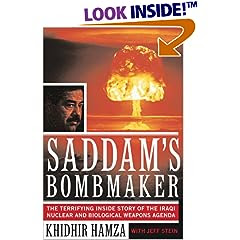 Today, if anyone tells you that sanctions were working in Iraq prior to the war, they are either (a) prevaricating or (b) blissfully ignorant. Certainly, that much is clear from the Volcker Report.

Consider that one of the Americans named in the report is Shakir Al-Khafaji, who received dibs on 12 million barrels of Saddam's oil. You may recall that this influential businessman orchestrated a visit to Baghdad in September of 2002, leading a delegation of anti-war Congressional Democrats.

Thus it came to pass: a Democratic congressman -- Jim McDermott of Washington -- reportedly accepted cash payments from Al-Khafaji (a suitable proxy for Saddam). Also on the trip were David Bonior (D-MI) and Mike Thompson (D-CA).

Together, this abysmal crew became Saddam's dupes. Consider their statements after returning from the Baghdad junket. George Will wrote:

And now the Volcker report confirms what many had long believed. These Democrats and certain other anti-war Galloway clones were, in effect, Saddam's puppets. Some were paid, some were not. All were in thrall to a mass-murdering despot, the likes of which the world hasn't seen since Pol Pot.

The motives, then, of some in the anti-war Left are crystal clear. They wanted Saddam's loot. They didn't care a whit about the war on terror, Scuds, chemical weapons, rape rooms, inspections, nuclear arms, torture chambers designed for children, or Al Qaqaa. They wanted cold, hard cash.

Now consider that today's thought-leaders of the anti-war Left Bank echo these same, morally bankrupt precepts. They claim that sanctions and inspections were destined to work. They posit that Bush -- not Saddam -- lied. They ignore the ramifications of Abu Abbas, Abu Nidal, Zarqawi, Ansar al-Islam, nuclear centrifuges, and the terrorist training camp at Salman Pak, all of which were conveniently located in or near Baghdad prior to the war.

To term this posse "useful idiots" (a la Lenin) is to severely overestimate their intellectual acumen. Someday, the pro-American Democratic party of FDR, JFK and Truman will return. But, today, that day seems very far off.
at 8:55 AM
Email ThisBlogThis!Share to TwitterShare to FacebookShare to Pinterest