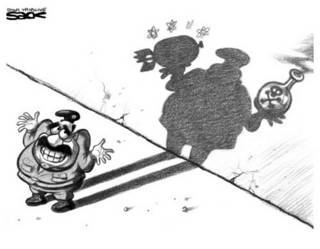 Here are two ledes. Can you tell which one represents the real news article -- and which is bogus?

1 A top Iraqi General revealed there were no WMDs in Iraq prior to the war:

2 A top Iraqi General reported that Iraq airlifted WMDs into Syria just before the invasion of Iraq:


* * *
Here's the answer to today's thought experiment: if the first article were true, you'd have seen it plastered on the front page of the New York Times -- and dozens of other major daily papers -- for weeks on end (remember Al Qaqaa?). The second article, however, really happened. Since it doesn't portray the Bush administration in an unflattering light, however, you won't see it anywhere near the the front page of most American dailies.

Thank you for participating in today's thought experiment.

p.s., And if you're wondering why Hussein ordered Sada to move the WMD's, just ask Jay Rockefeller. I sincerely hope Rockefeller is prosecuted to the maximum extent allowed by law if those allegations are true.
at 5:52 AM
Email ThisBlogThis!Share to TwitterShare to FacebookShare to Pinterest