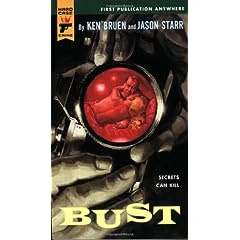 The CEO of NetWorld, Max Fisher, wants his wife dead. He's decided that he's ready to marry his girlfriend Angela -- a fiery Greek-Irish executive assistant with amazing new components -- and start over. Divorce is not an option, what with half of his formidable assets on the line.

So Max agrees to meet Angela's cousin's buddy, a hit-man named Popeye. What Max doesn't know is that Popeye is actually Angela's real boyfriend. He's a psychopathic Irish "proveen" -- a small-time enforcer for the "Ra" (IRA), who are smart enough to keep him at arm's length. Predictably, given this cast of characters, the hit goes down, plenty of things go awry, and things start to spin out of control.

Compounding matters is a hood named Bobby Rosa, now confined to a wheelchair, who makes his living blackmailing couples engaged in compromising relationships. Through sheer coincidence, Rosa happens to snap some shots of Max and Angela "celebrating" his wife's departure. Once Rosa confronts Fisher -- who is already under heavy police scrutiny -- with the photos, the plot swings in a rush of completely unpredictable turns.

You'll be hard-pressed to tell where Bruen's work ends and Starr's begins. The story is seamless and pulse-pounding. The characterizations are deep; you'll feel you've gotten under the skin of Max, Angela, and even the nutcase hit-man. My guess is you won't be able to stop reading until you flip the last page.
at 6:24 AM
Email ThisBlogThis!Share to TwitterShare to FacebookShare to Pinterest