Don Surber celebrates today's victory of live voters over dead ones. As you might have guessed, Democrats had sided with the notion that illegal aliens, felons and deceased persons should have their say on election day. 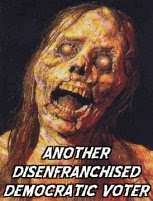 The U.S. Supreme Court voted 6-3 to uphold an Indiana law aimed at ending voter fraud. Justice John Paul Stevens wrote the decision. Stevens said the law "is amply justified by the valid interest in protecting 'the integrity and reliability of the electoral process'."

Justices Stephen Breyer, Ruth Bader Ginsburg and David Souter dissented. AP said they voted against Bush vs. Gore in 2000. But that is wrong as that passed 7-2. And of course, that 2000 decision has nothing to do with the Indiana requirement that you show a photo ID.

"We cannot conclude that the statute imposes 'excessively burdensome requirements' on any class of voters," Stevens said. Indeed, the 2 plaintiffs who sued include a snowbird who was registered to vote in both Florida and Indiana. She was refused permission to vote in Indiana because she flashed her Florida driver's license.

In short, the law works.

Put simply, the only thing voter ID deters is fraud. 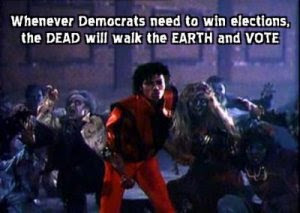 Without identification, a person cannot apply for welfare, can't drive, can't fly, can't hold a job, can't have a bank account, can't apply for either social security, Medicare or Medicaid, and can't apply for food stamps or WIC.

The only folks opposing voter ID appear to be those who demand fraudulent voting, otherwise known as "Democrats."

Jammie Wearing Fool snarks, "...if we can only get this enforced in the other 49 states, there'd be a lot of dead Democrats no longer voting."