Painting from a Pennsylvania Church confirms Obama was right


Barack Obama may have been right when he said:

You go into some of these small towns in Pennsylvania, and like a lot of small towns in the Midwest, the jobs have been gone now for 25 years and nothing's replaced them. And they fell through the Clinton administration, and the Bush administration, and each successive administration has said that somehow these communities are gonna regenerate and they have not. So it's not surprising then that they get bitter, they cling to guns or religion or antipathy to people who aren't like them or anti-immigrant sentiment or anti-trade sentiment as a way to explain their frustrations.

Why is Obama right? 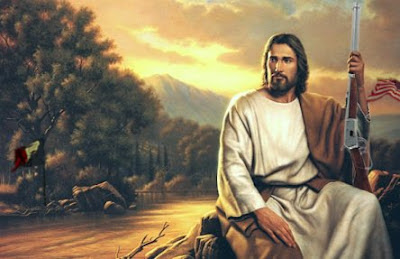 Here's an exclusive snapshot of a painting I located in a small town Pennsylvania church. The artwork is entitled Jesus guards a Rio Grande border crossing.

Hat tip: Pass the Ammo. Linked by: Jules Crittenden, who has a great roundup. Thanks! Do check out: Ace, Fausta, My Vast Right Wing Conspiracy ("You’re all a bunch of ignorant, xenophobic, fundie hicks, but that’s okay, because you little people can’t help it"), Michelle and STACLU.
at 4:35 PM
Email ThisBlogThis!Share to TwitterShare to FacebookShare to Pinterest
Labels: Democrats, Obama