Scientists near discovery of 'God particle'


Mark Henderson, of the London Times:

The 40-year hunt for the holy grail of physics – the elusive “God particle” that is supposed to give matter its mass – is almost over, according to the leading scientist who first came up with the theory... Peter Higgs, whose work gave his name to the elusive Higgs boson particle, said that he was more than 90 per cent certain it would be found within the next few years. 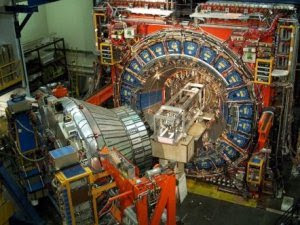 The Higgs boson was the professor’s elegant 1964 solution to one of the great problems with the standard model of physics – how matter has mass and thus exists in a form that allows it to make stars, planets and people. He proposed that the universe is pervaded by an invisible field of bosons that consist of mass but little else.

As particles move through this field, bosons effectively stick to some of them, making them more massive, while leaving others to pass unhindered. Photons, light particles that have no mass, are not affected by the Higgs field at all...

The folks at FermiLab have more on Higgs-Boson in what they assert is plain English.
at 8:19 PM
Email ThisBlogThis!Share to TwitterShare to FacebookShare to Pinterest
Labels: Scitech