Your helpful guide to Obama-speak.

Obama on Friday: "This is a phony issue... So let me address it right now... The reason that I don't always wear a flag pin is not that I disrespect the flag, it's that when I started wearing a flag pin after 9/11, I gotta admit that sometimes I would misplace it and so I didn't always put it on."

Obama in October: "You know, the truth is that right after 9/11, I had a pin. Shortly after 9/11, particularly because as we're talking about the Iraq War, that became a substitute for I think true patriotism, which is speaking out on issues that are of importance to our national security, I decided I won't wear that pin on my chest. Instead, I'm going to try to tell the American people what I believe will make this country great, and hopefully that will be a testimony to my patriotism."

* * *
And on Fox News, Chris Wallace asked a question about bipartisanship.

WALLACE: ...Over the years, John McCain has broken with his party and risked his career on a number of issues, campaign finance, immigration reform, banning torture... Senator, if I may, I think one of the concerns that some people have is that you talk a good game about, let’s be post-partisan, let’s all come together... I just want to speak to the larger issue.

The gang of 14... a bipartisan coalition... came together, you weren’t part of it. On some issues where Democrats have moved to the center, partial-birth abortion, Defense of Marriage Act, you stay on the left and you are against both... And so people say, do you really want a partnership with Republicans or do you really want unconditional surrender from them? 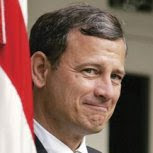 OBAMA: No, look, I think this is fair. I would point out, though, for example, that when I voted for a tort reform measure that was fiercely opposed by the trial lawyers, I got attacked pretty hard from the left... During the [John] Roberts [Supreme Court...] nomination, although I voted against him, I strongly defended some of my colleagues who had voted for him on the Daily Kos...

...It is true that when you look at some of the votes that I’ve taken in the Senate that I’m on the Democratic side of these votes, but part of the reason is because the way these issues are designed are to polarize. They are intentionally designed to polarize...

Translation: I won't side with Republicans on any issue, but I will post warm homilies about them on The Daily Kos.

at 7:23 PM
Email ThisBlogThis!Share to TwitterShare to FacebookShare to Pinterest
Labels: Democrats, Obama