Olbermann: someone should take out Hillary


Murder was the case that they gave me. Ace notes a world-class gaffe on the part of Keith Olberdumb. Among the reactions on the left, Anglachel takes the most umbrage at Olbie's perceived death threat. 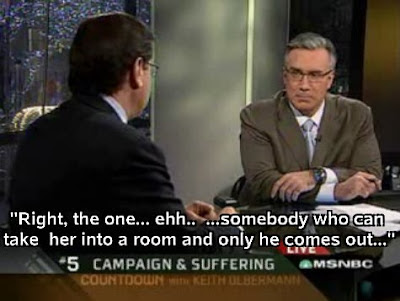 ...I have myself read comments advocating rape and murder. I have read main posts saying she was inciting violent acts against her, or saying they could "understand" the position of those who wished violent harm to befall her, her husband and her daughter. The descriptions of what Obama should do to Hillary verge on the pornographic. Not a day goes by that some prominent voice on the left or in the MSM does not demand her submission, subordination and public humiliation.

And now a major MSM celebrity and talking head, not some anonymous commenter on some obscure blog, has openly and unapologetically advocated that Hillary Clinton be marched into a dark room and murdered.

You can watch the YouTube clip and judge for yourself. Fortunately, I think Olbermundane lives in New York City where handguns have been outlawed (except for celebrities, mobsters and criminals).