Book Review: The Sea Shall Embrace Them 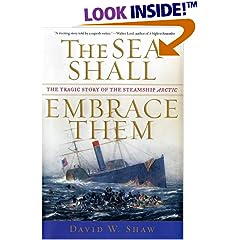 Fateful tale of cowardice and courage at sea

The fateful voyage of the Titanic was not the first time a luxury liner went to the bottom taking the cream of society with it. Decades before, the steamship Arctic, the pride of the Collins line, had suffered a catastrophic collision that resulted in 400 souls lost. The behavior of the crew was hardly the model of civility, though. The fact that only 22 passengers survived the ordeal, along with 65 crewmen, hints at the panic-stricken, near-mutinous conditions aboard the Arctic prior to its demise. Not a woman or child survived.

Collins, backed by private and -- controversially -- US Government funds, had created the first credible competitor to Cunard's line of packet ships. When the Crimean war forced Cunard to convert his ships to British naval use, the Collins line had a chance to establish itself as the predominant Transatlantic packet service. But the final voyage of the Arctic helped seal Collins' fate: its foolhardy rush through heavy fog, intended to maintain speed records, resulted in a massive collision with a French, iron-hulled fishing vessel: the Vesta.

While the damages to the Arctic initially appeared slight, all too soon its wooden hull (with no watertight compartments) was discovered to have been holed in three distinct areas. And because the Vesta had left a jagged portion of its bow sticking in the steamship's hull, the traditional methods of patching at sea were rendered impossible. As the ship foundered, panic-stricken crew-members and passengers fought for the all-too-limited number of seats on the lifeboats.

Shaw has done impressive work chronicling a non-fictional story that reads like fiction. But there's a reason Shaw didn't write this work as a novel: there are so many bizarre coincidences and events involved that only a strict recitation of the known facts could have resulted in a believable story. The demise of the Arctic is a chilling tale and one with every bit the controversy, mystery, heroism and cowardice of its much better known counterpart.
at 1:47 PM
Email ThisBlogThis!Share to TwitterShare to FacebookShare to Pinterest