Fascinating, rough-and-tumble glimpse into the underworld, circa 1900 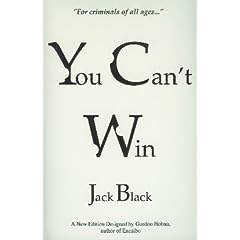 First published in 1926, the autobiography of infamous criminal Jack Black quickly became a bestseller. Black's tale is fascinating. In turns, it describes a transformation from choir-boy, to bill-collector, hobo, burglar, hold-up man, safe-cracker, prisoner, "hop" (heroin) addict, fugitive, parolee and -- finally -- reformed citizen. In fact, the tragic irony of the tale is that Black's entire criminal career began through a police mistake: rounding him up in a brothel crackdown though he was simply collecting on a milk bill.

With a spartan yet captivating voice, Black describes the turn-of-the-century Old West. Bat Masterson, Salt Chunk Mary, Foot-and-a-half George, and other memorable characters make appearances as Black travels through hobo settlements, small towns, mining camps, and bustling cities like Vancouver, Frisco, Seattle, and L.A. All the while, Black uses his creative mind and adroit skills at thievery to pull off a wide range of capers.

The book's undercurrent is a criminal code of ethics that is every bit as honorable as that of a law-abiding citizen. While the law routinely meted out brutal punishments, including 30 lashes in a Canadian prison and a horrific three-day bout with a straitjacket -- all ostensibly for corrective purposes -- Black's point is that it served the exact opposite purpose. It hardened his resolve and created within him a furious urge for revenge against all of society.

Though the majority of the book is autobiographical, much of it is designed as a cautionary tale for youth who might otherwise be attracted to a life of crime. In addition, Black serves up advice for society as a whole: namely, that ratcheting up punishments for first-time offenders causes more problems than it solves. Black offers suggestions that society treat disadvantaged children with more care and urges job creation as alternatives to criminality among youth.

Interestingly, the book's afterword hints that many of Black's escapades were omitted or glossed over. He was sentenced to 25 years for shooting a man (not described in the book) and he seemed to be the drug kingpin during his later years in prison. Nonetheless, Black's tale is a captivating glimpse into a side of the American West that is seldom seen.
at 7:05 PM
Email ThisBlogThis!Share to TwitterShare to FacebookShare to Pinterest