Remember when the Clinton administration proclaimed success in keeping nuclear weapons out of the hands of North Korea's inbred criminal family?

Anyhow, the 21st century's most flatulent world leader is pounding his pots and pans, trying to get attention and scare anyone within listening distance.

Given its track record of missile launch failures, NoKo may have to resort to intercounty ballistic Jarts and Atomic Wrist Rockets.

North Korea has threatened to sink an American aircraft carrier heading towards the peninsula as part of joint military exercises with Japanese naval ships in the Philippine Sea. 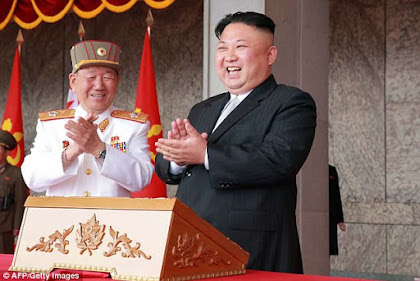 The USS Carl Vinson was the target of North Korea's hypothetical attack, CNN reports, with state-run media in the country boasting about its military might and capabilities.

The Rodong Sinmun newspaper published an editorial warning Kim Jong-un is ready to use its 'military force' that is able to sink a 'nuclear-powered aircraft carrier with a single strike'.

The outlet went on to claim North Korea's military has the ability to 'reach continental US and Asia Pacific region', and that the country is in possession of a hydrogen bomb - described as the 'absolute weapon'.

The warning came as a pair of Japanese destroyers joined the Vinson and two other US warships as they continued their journey north in the western Pacific Ocean, the Navy said in a statement.

The US vessel had canceled a scheduled visit to Australia to divert toward North Korea in a show of force, though it still conducted a curtailed training exercise with Australia before doing so.

Reports that Kim Jong-un has weaponized his many buckets of leftover mac-and-cheese could not be verified at press time.

Larry Sheldon said...
This comment has been removed by the author.
4:08 AM

Are we not glad (I never see it mentioned!) that the Democrats prevented Mac Arthur from solving this problem, once and for all?

Close call, that. We almost won one.

Since China has stopped buying the Norks main export, time could get tough for the little guy. It only takes one of his generals to take him out.