YES, THAT JUST HAPPENED: When it comes to our borders, there’s definitely a new sheriff in town

The Obama administration’s hands-off approach to border security is a thing of the past, Attorney General Jeff Sessions dramatically declared at a border crossing as he vowed to bring felony charges against those who unlawfully enter the U.S. multiple times.

Enforcement action against criminal aliens will now be given the highest priority. President Obama said much the same thing over his years in office, promising to deport the worst members of the illegal alien community. He did little to carry out his pledge.

Sessions is hoping that with more than $4.1 billion in U.S. Department of Justice grants at stake in the current federal fiscal year ending Sept. 30, sanctuary jurisdictions won’t be able to afford to continue flaunting federal immigration law. The U.S. government is also threatening to rescind monies already granted from such governmental units.

The so-called sanctuary city movement is a key component of today’s left-wing activist repertoire. Its supporters are the soft-headed souls who carry protest signs emblazoned with the red-herring of a slogan “no human being is illegal” and who apply all the usual smear-adjectives – including racist, xenophobic, and Islamophobic – to anyone who supports having secure borders.

Sessions is pressing ahead with plans to make it easier to hire new immigration judges to hear cases at the border and to keep those individuals accused of violating immigration laws detained in facilities at the border, presumably for the sake of efficiency. 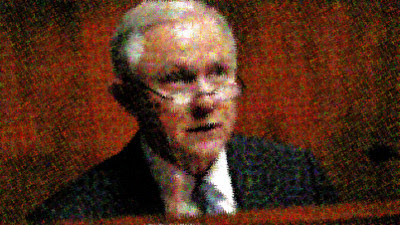 Sessions said 25 judges have already been deployed to detention centers on the U.S.-Mexico border, according to Politico. Another 50 judges will be “on the bench” later this year. A separate 75 judges will be added in fiscal 2018 at a cost of $80 million.

The need is obvious. About half of all federal arrests in 2014 were for immigration crimes, and 93 percent of that figure took place at or near the border, the Bureau of Justice Statistics recently reported.

Sessions’s determination and law-and-order zeal are turning off some among the Washington establishment who, quite properly, view him as a threat to the status quo.

They see him as a frightening new sheriff in town standing in the way of the endless immigration amnesties that have fattened generations of lobbyists.

But this isn’t really a useful way of looking at the situation.

It’s not that there’s a new sheriff in town – it’s the fact that after eight years of Obama’s open-borders lawlessness there finally is a sheriff in town.

Order is coming to the border, Sessions vowed.

“For those that continue to seek improper and illegal entry into this country, be forewarned,” Sessions said in his prepared remarks Tuesday at a port-of-entry in Nogales, Santa Cruz County, Arizona, opposite its namesake city in the Mexican state of Sonora.

But it is also here, along this border, that transnational gangs like MS-13 and international cartels flood our country with drugs and leave death and violence in their wake. And it is here that criminal aliens and the coyotes and the document-forgers seek to overthrow our system of lawful immigration.

Let’s stop here for a minute. When we talk about MS-13 and the cartels, what do we mean? We mean criminal organizations that turn cities and suburbs into war zones, that rape and kill innocent citizens and who profit by smuggling poison and other human beings across our borders. Depravity and violence are their calling cards, including brutal machete attacks and beheadings.

Going forward, federal prosecutors will now be required to consider for prosecution a panoply of immigration offenses that the previous administration didn’t take seriously. This includes assaults on federal law enforcement officers and fraudulent marriages entered into for immigration purposes.

U.S. attorneys will now be directed to consider prosecutions in the “transportation or harboring of aliens,” which is “a booming business” for lawbreakers, Sessions said.

We are going to shut down and jail those who have been profiting off this lawlessness — people smuggling gang members across the border, helping convicted criminals re-enter this country and preying on those who don’t know how dangerous the journey can be.

When an alien who has previously entered the country illegally, which is a misdemeanor, tries again to sneak into the U.S., that individual will be charged with a felony if “certain aggravating circumstances are present.” Prosecutions of aliens illegally coming back to America after being previously removed will be prioritized “especially where indicators of gang affiliation, a risk to public safety, or criminal history are present.”

Radical-libertarian analyst Alex Nowrasteh of the Cato Institute thinks prosecuting recidivist illegal aliens is wasteful and harmful to the economy.

“Every dollar spent on prosecuting an illegal immigrant for illegal reentry is a dollar that could have been spent on prosecuting or investigating a real crime,” he said. “It’s a shame the government is prioritizing the enforcement of, essentially, labor market regulations over violent and property crimes.”

Leon Fresco, a former deputy assistant attorney general in the Justice Department under President Obama, whined about Sessions getting serious about securing the border.

“We’ve never had this sort of zero tolerance for illegal immigration prosecutions,” Fresco said. The approach could help tame the border but in the process some valid asylum seeks might get arrested, he moaned.

“That concerns me,” Fresco said. The new enforcement directive from Sessions "could easily be interpreted to mean: 'Prosecute as many people as you can for these things.'”

Well, actually, that’s exactly what Sessions said he wants to do. Evidently, Fresco thinks enforcing the law is a scary thing.

The promise by the attorney general to get tough on illegals comes as the reliably squishy Speaker of the House Paul Ryan (R-Wisc.), whose calculations recently helped to prevent Obamacare from being repealed, continued to undermine President Trump’s promise to build a “big, beautiful” wall on the border with Mexico.

Last month the White House asked Congress to appropriate $1.4 billion for wall construction by April 28 in a must-pass spending measure needed to keep the government fully open for business. Senate Minority Leader Chuck Schumer (D-N.Y.) has promised to keep the borders wide open for Muslim terrorists and illegal aliens by refusing to approve such funding. Democrats have even promised to shut down the government over the issue, if necessary.

An insouciant Ryan spewed bureaucratic falderal to justify his inaction, declaring he can’t be bothered to push for new border spending until next year.

“The big chunk of money for the wall, really, is ... next fiscal year’s appropriations because they literally can’t start construction even this quickly,” Ryan told CBS.

President Trump promised the American public that he was going to secure the border, and part of securing the border is putting in place the proper technology and resources that allows us to be successful and a border wall in strategic locations is one of those things we must get done.

A border patrol agent for 20 years, Judd said that with Trump’s policy changes “the handcuffs are being taken off of the law enforcement agents and we’re putting the handcuffs back on the criminals.”

Whether you lean left, right, or you’re in the middle you have to be a fan of what he’s done for the border patrol, for the border security. He’s done more in the first 100 days than the last two administrations have done in 16 years.

Judd said he has “never seen such a quick drop” in illegal immigration, and attributes the decline “strictly to President Trump’s policies.

Meanwhile, U.S. Immigration and Customs Enforcement (ICE) announced it is dropping its regular Declined Detainer Outcome Report (DDOR) until concerns about the report’s accuracy can be resolved. Some affected localities had complained about the reports which were designed to name and shame governments that refuse to hand over illegal aliens to ICE.

ICE describes the innovative, much-heralded DDOR as “a weekly report that shows those jurisdictions with the highest volume of declined detainers, and includes a list of sample crimes associated with those released individuals.”’

Despite that setback, ICE has been stepping up enforcement efforts.

Days ago the agency reported taking 368 illegal aliens into custody in seven states and the District of Columbia, which is almost a 250 percent increase over the 106 detained the week before. At least two of the detainees were linked to the transnational MS-13 street gang.

On the westernmost portion of the nation’s Southern border, detentions are way down, apparently because fewer illegals are making the crossing with Donald Trump in the White House. Fewer than 12,200 people were caught in March, a 64 percent drop from the same period last year, and the lowest monthly figure in at least the past 17 years, the Los Angeles Times reported Monday.

Back in Nogales, Sessions took credit for the administration’s progress on immigration enforcement.

Sessions went on: “The lawlessness, the abdication of the duty to enforce our immigration laws, and the catch and release practices of old are over.”

Thank God we finally have a man in power. President Trump, with Jeff Sessions to back him up in FINALLY honoring our LAWS. The same laws the left prove they are more than willing to continue ignoring. Voting these LAWLESS DEMS out of power in 2018 and 2020 will continue our laws being enforced. The dem party has clearly proven themselves unwilling to honor the oaths they take to UPHOLD our laws rather than violating them, and have proven they care MORE about their illegals than they do the taxpayers who PAY their salaries.
-
The cost of the left's illegals is $113 BILLION dollars a YEAR to continue supporting them. Don't let the lefts argument/ complaints sway our reserve to UPHOLD the laws of our land over their false claims of how expensive it is to enforce them. Just look to the SAVINGS of returning to upholding our immigration laws.