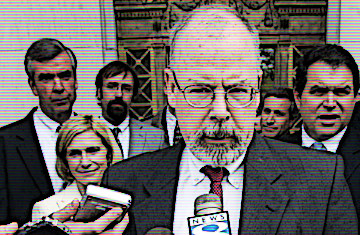 House Republicans Jim Jordan and Mark Meadows just sent an interesting request to the U.S. Attorney of Connecticut, John Durham. That's a name we haven't heard before. The letter reads, in part:

"During the course of our investigation, we interviewed former FBI General Counsel James Baker and discovered your office is investigating him for unauthorized disclosures to the media. We are writing to request additional information about your ongoing criminal investigation of James Baker, as disclosed to the Committees by Mr. Baker's attorney."

Daniel Levin, Baker's attorney, stated during closed-door testimony that his client was unable to answer questions about his interactions with the media because Baker is currently the subject of a criminal investigation.

A great public servant retired from the FBI today. Jim Baker’s integrity and commitment to the rule of law have benefitted our country through 5 presidents, of both parties. We are fortunate he and so many others choose to devote their lives to justice.

From 1998 to 2008, Mr. Durham served as a Special Attorney for the District of Massachusetts and Head of the Justice Task Force, where he reviewed alleged criminal conduct by FBI personnel and other law enforcement corruption in Boston, led the prosecution of a former FBI Supervisory Special Agent and a former Massachusetts State Police Lieutenant, and handled direct appeals and related proceedings following convictions after trial.

This apparently refers to the case in which notorious Boston gangster Whitey Bulger conspired with FBI agent John Connolly to use the law enforcement agency against his enemies in organized crime.

Bulger’s connection with the FBI also made him less of a target of law enforcement, particularly as he quickly co-opted agents such as Connolly. In addition to giving agents secrets, he gave them gifts and cash as well. According to the Boston Globe, Bulger and Flemmi gave Connolly $235,000 over two decades. Bulger also lavished John Morris, Connolly’s supervisor and the head of the FBI’s organized-crime squad in Boston, with airline tickets and cases of expensive wine.

Connolly ended up serving as an informant for Bulger, tipping him off to those willing to testify against the gangster, whereupon those individuals were unceremoniously executed.

Enter Robert Mueller, who has interesting ties to the Bulger-Connolly affair. As Howie Carr asks, "What did Bob Mueller know about the FBI’s framing of four innocent men for a murder they didn’t commit, and when did he know it?"?

This is an important question for the “special counsel,” and for two days I’ve been emailing his press office, asking for answers about his tenure in the U.S. attorney’s office here, specifically, his time as acting US attorney in 1986-87.

This is a major FBI scandal, perhaps the most outrageous one in American history. The FBI railroaded four men to prison for a murder the G-men knew they did not commit, and then made sure they remained in prison for upwards of 30 years... They (or their estates, because two of them died in prison) were eventually awarded a total of $102 million in 2007 by a federal judge for false imprisonment.

...Mueller’s predecessor and his successor both lobbied state authorities not to release the innocent men. But did Mueller? Michael Albano, a former member of the Parole board, as well as a former mayor of Springfield, says he has seen a letter Mueller wrote about the imprisoned men... In 2013, the Boston Globe also reported the existence of such a letter from Mueller.

...So far, the special counsel’s office has not responded to two inquiries as to whether Mueller ever lobbied to keep the innocent men behind bars, despite the overwhelming evidence of their innocence, including records of the FBI, which he would eventually run for eight years.

...So far, no answers. So let me ask him the question again publicly.

Mr. Mueller, what did you know about the framing of four innocent men for a crime they did not commit? When you were working in, and then running the office that insisted that the innocent men not be released from prison, did you ever write any letters demanding that the parole board not correct this gross miscarriage of justice?

And when did you find out that the FBI office in Boston was in the business of framing innocent men on behalf of their serial-killing, cocaine-dealing underworld paymasters?

And what exactly did you do about when you found out the extent of this unprecedented corruption in an agency you supervised for eight years?

So it appears, at least from the public record, that it was Durham -- not Mueller -- who had to clean up the mess.

One hopes he can help do so again, this time on a national stage.

'Why Is California Falling Apart??' - Tucker Carlson and Dave Rubin Talk About Problems In California - Video