What if the FBI Had Probed Obama for Collusion with Iran?

That’s the question Lee Smith poses at The Wall Street Journal in a thought experiment that lays bare the greatest scandal in American scandal, #Spygate:

The Federal Bureau of Investigation reportedly opened a counterintelligence investigation in 2017 to find out if President Trump was a Russian agent. What if the FBI had similarly looked into whether President Obama was an agent of Iran?

Counterintelligence agents would have examined the target’s personal and professional networks. The FBI investigated at least four Trump campaign figures for supposed ties to Russia. Only one, Mike Flynn, worked in the administration, and for less than a month. The Obama administration had a few senior officials with personal ties to Iran.

As Smith points out, Obam’s consigliere, Valerie Jarrett, is Iranian-born and apparently led a series of secret negotiations with the world’s foremost terror state. And Secretary of State John Kerry’s daughter was said to have had close ties to the son of Iran’s foreign minister.

By the FBI’s Trump standards, those suspicions would have led to wiretaps of Obama, Jarrett and others.

After all, just a few weeks after Carter Page -- whom the FBI slandered in FISA applications four times, stating that he was “an agent of a foreign power -- asked FBI director James Comey to publicly exonerate him, the bureau was instead wiretapping him. 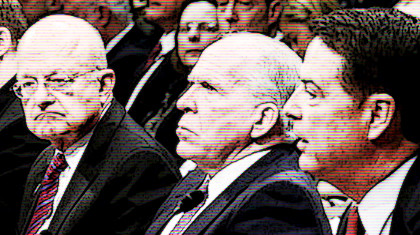 Furthermore, in 2008, future Obama CIA director John Brennan “advocated a grand bargain with Iran”. This apparently qualified him to advance to the highest echelons of Obama's intelligence community.

The following year, his first year in office, Obama directed the White House to organize secret meetings with Iran’s Mullahs.

To make matters worse, Obama kneecapped “Operation Cassandra”, a massive multi-agency operation designed to eradicate Hezbollah’s drug smuggling and money-laundering networks. This scandal has never been fully investigated, except by a few diligent reporters, and is stunning in its scope and scale.

As if that weren’t enough, Obama granted Iran $700 million a month in relief from sanctions for 18 months straight. As icing on the cake, President Jarrett Obama directed Iran receive $1.7 billion in cash.

This cash, of course, ended up in the hands of Hezbollah, Iran’s proxy army in Syria and the group that slaughtered 241 U.S. Marines in Lebanon in 1983.

Now all of these activities, bizarre and unprecedented as they were with respect to an avowed terror state, somehow weren’t considered “collusion" or "treason” by the Mueller/Comey FBI.

Compare this with then-candidate and later-President Trump’s actions. In 2017, he stated in an interview that he had terminated Comey for, among other things, the “Russia thing”. And he expressed hopes for improved relations with Russia and Vladimir Putin.

Furthermore, Trump’s actions against Russia, from sanctions to military strikes in Syria, have been far tougher than any recent President, as even the useless Politifact has had to acknowledge.

The history books will call it Spygate.

And yet, nothing will happen to those involved.

Americans must NEVER ACCEPT that THESE TRAITORS will never be prosecuted and sentenced.

No mention of Trump surrogates activities with Russia such as Jared Kushner, Rex Tillerson, Paul Manafort, Rick Gates, Robert Bolton, Michael Cohen, George Papadopoulos, the list goes on with names published by many news sources and the FBI. The names are too numerous to mention here but you get the point that they all at some juncture during the Trump campaign or his administration had both ties or relationships with Russian operatives.