VICTOR DAVIS HANSON: The Wolves Turn on Each Other

There is something Kafkaesque about the current round of investigating possible FBI, CIA, National Security Agency, Justice Department, and National Security Council wrongdoing during the 2016 election, Trump transition, and early presidency.

Special Counsel Robert Mueller had been permitted to range well beyond his mandate of “Russian collusion.” He outsourced much of the selection of his “dream team” and “all-star” staff of attorneys to his deputy, Andrew Weissman. In turn, Weissman—who commiserated with Hillary Clinton at her ill-fated “victory” party on the evening of her defeat—stocked the team with Trump-haters, liberals and progressives, Clinton donors, a few who had previously served as attorneys for the Clinton Foundation, and Clinton or Obama aides. Most of these were themselves briefed during the early dissemination of the fraudulent Steele dossier.

Yet after all the bias, prosecutorial leveraging, the process crimes, the perjury traps, and after 22 months, $34 million, and a 440-plus page report, Mueller’s “hunter-killer” team did not establish that President Trump colluded with the Russians to warp the 2016 election.

In fact, Mueller could not find prosecutable “obstruction” of justice by Trump to impair the investigation of what Mueller concluded was not a crime.

The Wolves Turn On Each Other

Now we turn to the real unspoken question: how did it happen that the top machinery of the U.S. government meddled in an election, and sought to sabotage a presidential transition and early presidency? 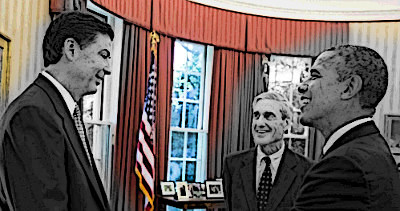 James Clapper, John Brennan, and James Comey are now all accusing one another of being culpable for inserting the unverified dossier, the font of the effort to destroy Trump, into a presidential intelligence assessment—as if suddenly and mysteriously the prior seeding of the Steele dossier is now seen as a bad thing.

And how did the dossier transmogrify from being passed around the Obama Administration as a supposedly top-secret and devastating condemnation of candidate and then president-elect Trump to a rank embarrassment of ridiculous stories and fibs?

Given the narratives of the last three years, and the protestations that the dossier was accurate or at least was not proven to be unproven, why are these former officials arguing at all? Did not implanting the dossier into the presidential briefing give it the necessary imprimatur that allowed the serial leaks to the press at least to be passed on to the public and thereby apprise the people of the existential danger that they faced?

Why would not they still be vying to take credit for warning President Obama that Donald J. Trump was a likely sexual pervert, with a pathological hatred of Obama, as manifested in Trump’s alleged Moscow debauchery—a reprobate who used his subordinates to steal the election from Hillary Clinton and who still must somehow be stopped at all costs?

That entire bought fantasy was the subtext of why Mueller was appointed in the first place. It was the basis for the persistent support to this day among the media and progressives for the now discredited notion of “collusion.”

If our noble public servants really believed all that to be true, would not Comey and Brennan instead now be arguing that each, not the other, was bold and smart enough to have included the seminal dossier into a presidential briefing? Comey in public still insists that the dossier is not discredited, though in all his sanctimonious televised sermons, he never has provided any details that support the supposed veracity of Steele’s charges. Why then is Comey not demanding that the FBI take credit for bringing this key piece of intelligence to Obama’s attention rather than fobbing off such an important feat to the rival CIA?

Why, for that matter, are Andrew McCabe and James Comey at odds?

The commonality of their respective sworn testimonies has been that Trump was and remains a danger to the republic—to the extent that McCabe admittedly staged a comical coup attempt and Comey committed a likely felony in leaking to the media classified documents that had memorialized his versions of his own confidential conversations with the president.

Why, given their protestation of innocence and their cry-of-the-heart leaking to save us, would not McCabe and Comey be heaping praise on each other, as each tried to outdo the other in pursuing extraordinary measures to end the clear and present danger of Donald Trump?

McCabe has testified that the dossier was the anchoring evidence that the FBI presented to the FISA court. Comey denies that fact. But once more why would they disagree? And why would they be at odds over supposedly noble leaking to the press?

McCabe claims Comey allowed him to leak gossip and rumors about Trump’s culpability; Comey says he did no such thing. But should not both still be bragging that they had the guts to seed the dossier and related confidential information to the media to the stop the national threat of Donald Trump?

We know that Comey has no intrinsic objection to scattering classified information, because he has bragged that he did just that after his firing to help appoint a special counsel. We know in addition that McCabe has no problem with divulging confidential information because to the media he has accused Deputy Attorney General Rod Rosenstein, in a confidential conversation, of volunteering to wear a wire in hopes of entrapping the President of the United States at some incriminating moment.

For the Good of the People?

Why again are McCabe and Comey pointing fingers at each other as leakers and purveyors or ruinous gossip, when both have admittedly leaked and are apparently proud of it, reasoning that they did it for us, the people, in our moment of peril from our president whom the people elected?

Why are McCabe and Rosenstein at odds? The former says the latter was willing to record stealthily his conversations with Trump in an effort to remove him, the latter says it was a joke and that McCabe engineered such a discussion. But why the disconnect? Both in varying ways have tried to obstruct declassification of government documents that might suggest government overreach under the Justice Department and FBI. Both seem at odds with Trump, both the man and his presidency. Why then are not each vying with the other for the greater credit of nearly engineering a coup to remove an existential threat like Donald Trump, a supposedly legal act under their allegedly mutually referenced application of the 25th Amendment?

These are rhetorical questions because we know the answers: our top officials at the DOJ, CIA, FBI, and NSC, as well as James Clapper as director of national intelligence, likely broke federal law, betrayed their agencies, and in general acted in an abjectly unethical manner on the premises that 1) Hillary Clinton would be the next president and their behavior would be rewarded; and 2) in the aftermath of her defeat and after Trump became president, that Trump could either be removed or so discredited that their own prior illegality would either never come to light or would be contextualized as noble resistance.

Until election night, they seemed to have been correct in their assumptions.

Given the subsequent serial efforts of #TheResistance to remove or destroy president-elect and President Trump—the suits to overturn the voting in three states, the attempted subversion of the Electoral College voting, the efforts to invoke the Emoluments Clause, the Logan Act, and the 25th Amendment, the early impeachment vote, the recusal of Attorney General Jeff Sessions, the Mueller investigation, and the brouhaha over Stormy Daniels, the Trump tax returns, Michael Cohen and Michael Avenatti—these officials still believed that their prior behavior would either eventually be praised or at least excused. But they bet foolishly against the viability of Trump.

The appointment of William Barr as attorney general has sobered the lawbreakers, and perhaps soon the media, which may not wish to go down the drain with their erstwhile FBI and CIA speaking-truth-to-power heroes.

No longer are Brennan, Clapper, Comey, and McCabe along with a host of others insisting that they acted nobly. No longer are they in solidarity in their defiant opposition to Donald Trump.

Now, for the first time, they are pointing fingers at one another, because they have come to realize that their prior criminality may not be rewarded, praised, or even excused, but rather prosecuted.

The day is coming when God, through Christ Jesus, will judge everyone's secret life. Romans 2:16

Mr. Hanson, please! Wolves are noble creatures! Maggots would be better, even though maggots do have some medicinal value.

It seems to me this is creating a glass ceiling. Are these guys just the dupes to be used and discarded? Who has allowed these guys to do what they did? Root cause has to be with Obama and those in the shadow behind him. I wonder if this is just Chicago Politics at a failed national level. It worked for Obama before, with a smaller area, but failed at the national level. Chicago was under total control of the machine, DC not so much. I wonder without the internet if this would be as big as it is now. Would opinions of VDH or real journalist like Sharyl Attkisson even be a known? I would bet the next time this is tried the net will be neutered. Ken