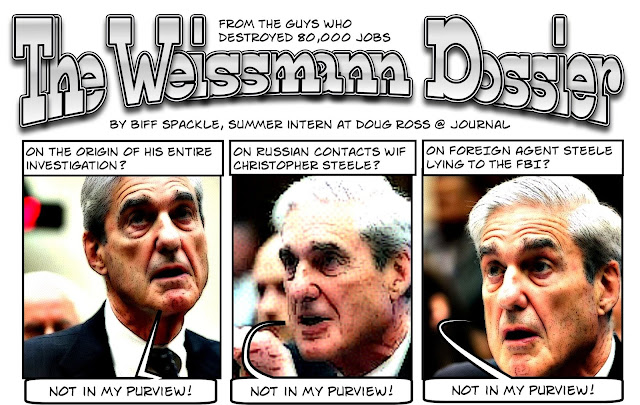 A well known mafia don avoided prison for decades by feigning dementia. When the cover was blown swamp denizen Mueller did a masterful impression of that Don. No sale.

Hang the bastard and all the other swamp denizens. I figure about 300 lining the main avenues of DC might start the reforms needed to change the country-by the way this includes the media, Wall Street, and Silicon Valley. 300 might be way too low better up it to 600. We can use the less fashionable avenues in Maryland and Virginia as well.

I second what Anonymous wrote.

At issue is the concept of administrative law. Anyone with a classical education would recognize this scheme as the same mess that brought about the downfall of Rome. It has no basis in our Constitution and then, as now, was developed by lazy politicians who wanted the authority but couldn't be bothered to do the work. Prior to the advent of the administrative state such politicians would win an election, show themselves to be fools and thieves then disappear at the next election. With the administrative state to cover for them thieves like Nancy Pelosi can stay in Congress for decades.

Whatever we do, we need to address the existence of the administrative state and put right and proper limits on it. We also need to set up a means where a majority of the states can recall hired or appointed officials, employees and judges. The states should also be able to to recall and reject laws and court decisions.

Indeed.....I have been advocating for the return of gallows for some time now. Lessons need to be taught.