ANDREW BREITBART: This Is Not Your Mother’s Democratic Party 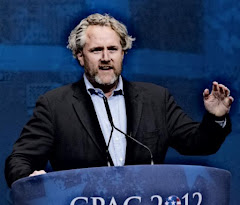 Right now, my Twitter feed is already calling me a big fat homosexual. Hello, children at home. No, your Dad's not gay. That's how the Left rolls.

Everybody asks me: why do you retweet? Why do you do that? ...In fact, there's probably no one in the world I respect more than Professor Hugh Hewitt and the other day he took me aside. He said, "I don't think you should do that, Andrew." Well, Professor Hewitt, on this issue I disagree.

Because they've held over our heads -- with contempt -- the false narrative of their innate tolerance. The least tolerant people you'll ever meet in your entire lives -- I know it, I live it every day. And I retweet it to remind them that I know exactly who they are.

...This is my war cry for 2012. You need to join me in my war against the institutional left.

That was the end of the Democratic Party. And in 2010, the DLC went under.

There's no such thing as a moderate Democrat. And so what do we get now, in Barack Obama?

In this election we're going to vet him

The videos are going to come out. The narrative is going to come out: that Barack Obama met a bunch of silver pony-tails [left wing academics] back in the 1980s, like Bill [Ayers] and Bernadine Dohrn who said "one day, we're going to have the presidency.'

And that who's in the White House. And that's who's outside right now [the Occupy movement] telling you that you don't have a right to be here. They would squelch your free speech just as easily as they do at Harvard, Vassar, Yale, Wesleyan - they're a bunch of totalitarian freaks.

The media can no longer be called objective journalists

And they pal around with our friends in the mainstream media. I always thought the media leaned to the left... but when they act like a Provost at a politically correct university and tell people to shut up, [then] no longer can they be called objective journalists. They're playing for the other side.

They've been part of demonizing good and decent people. They tried to defeat the Tea Party and when they failed, just like when they tried to create a [leftist] Rush Limbaugh and they failed with Air America, they want what they can't have. They wanted what they could not have and what did they create?

They created the "Occupy Movement". What is the Occupy Movement, you may ask? It's a natural, organic group of people -- you've never seen before in your life. Wait a sec-- these exact people protested against you at the GOP Welcoming Committee in 2008-- and two of them were arrested for planting Molotov cocktails. [These] are radicals against the police, radicals against you, exactly like Occupy, the same exact people, the same people who organized "Camp Casey" in Crawford, these are the same exact people who went down the highway at the end of the summer when Katrina happened, created Occupy New Orleans.

It's the same radicals, they've been in your life since 'Senator Obama' became part of your vocabulary. They are at war with you. They attack you. They throw eggs at you. And -- guess what? -- the media looks the other way. You're domestic terrorists, you know. Janet Napolitano warned me about that.

Yet when this group emerged, what happened? ...This is my thesis: the anti-war movement was never about anti-war. It was a Saul Alinsky community-organizing tool to get Barack Obama and the Left elected. It went away immediately.

The Occupy Movement is the Definition of Un-American

And the mainstream media created a narrative... Time Magazine's "Person of the Year... this is the anti-war movement! How do I know this? Because if I told this to ABC, CBS and NBC, they'd tell me it's a conspiracy theory -- that it's just a bunch of organic people. There's no organization going on, even though we have the emails to prove it. Or the undercover videos of Natasha Leonard of The New York Times organizing with the radicals. No, that didn't mean anything!

Bernadine Dohrn pointed out to me when I was snarkily asking 'What ever happened to the anti-war movement?', she let loose an affirmation of everything I know to be true. She said, "Well, that's not true... it's more or less what Occupy Wall Street is." And the mainstream media refuses to tell you that these are the same shock troops that have been ... instigating [against] us, instigating riots against the police, these people are the definition of un-American.

I don't care who our candidate is

And that's what the Tea Party is.

We are there to confront [the radical left] on behalf of our candidate!

I will march behind who ever our candidate is. Because if we don't, we lose.

They try to portray you in the worst possible light... and when I travel around the United States meeting people in the Tea Party who care -- black, white, gay, straight -- anyone that's willing to stand next to me to fight the progressive left, I will be in that bunker, and if you're not in that bunker 'cause you're not satisfied with this candidate, more than shame on you. You're on the other side.

They killed Andrew and they'll do the same to DJT, either figuratively or literally.

Breitbart was covering CRT when most of us thought it meant Cathode Ray Tube lol. My dad posted about it back in 2012. Shared here because it's even more relevant today! https://joekiddone.blogspot.com/2012/03/open-your-hearts-and-minds-obama.html