No wonder his long directorship of the Annenberg Challenge was curiously missing from Barack Obama's official biography. 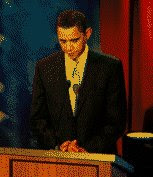 During the April 16 2008 Democratic Debate ABC's George Stephanopoulous asked Obama why his campaign had said the candidate was "friendly" with terrorist and communist William Ayers. The candidate replied, "George, but this is an example of what I'm talking about. This is a guy who lives in my neighborhood, who's a professor of English in Chicago who I know and who I have not received some official endorsement from. He's not somebody who I exchange ideas from on a regular basis... And the notion that somehow as a consequence of me knowing somebody who engaged in detestable acts 40 years ago, when I was 8 years old, somehow reflects on me and my values doesn't make much sense, George.

Unfortunately for Barack Obama, the just-released document entitled Chicago Annenberg Challenge: Assessment of the First Three Years provides the backdrop of a history in which Obama and Ayers are explicitly named as the leaders of a failed, ideologically-driven nine-figure giveaway.

"Anne Hallett, Warren Chapman, and Bill Ayers [were] all founding members of the Chicago Challenge..." (page 5)

[Ayers said]: "When Annenberg announced that was gonna give out half a billion dollars, I heard it on the radio at six in the morning. At seven in the morning, I had talked to Anne and Warren, and the three of us met for lunch... We began to plot a strategy... [to see whether] we could get some of that money to Chicago..." (page 11) 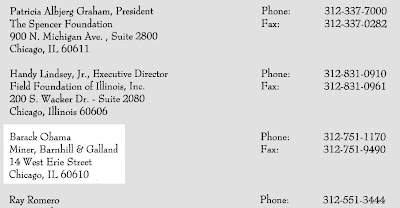 "The [group] that brought the grant to Chicago... created an organization that was also novel... A Board of Directors [including Barack Obama] ...was responsible for fiscal operations, developing a procedure for securing matching funds and making grants... ...More unusual was the body that came to be known as the Chicago School Reform Collaborative [including Bill Ayers], made up of members of the original Working Group..." 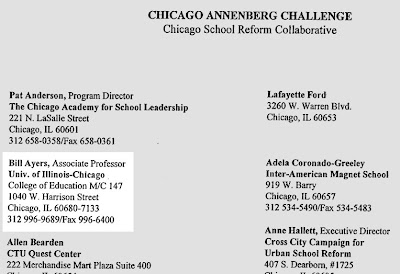 "The final, accepted proposal to the Annenberg Goundation lists the wide range of Collaborative responsibilities... a letter dated before the proposal from two of the founders, Anne Hallett and Bill Ayers, simply says, "The Collaborative will be the operational policy and planning group." (page 54)

For Barack Obama to claim that Ayers was simply "a guy who lives in my neighborhood" rather than a close colleague and ideological cousin is outrageous. Further, it is devastating evidence that Obama represents "more-of-the-same" political sleaze... and anything but "change".