Writing at the American Thinker, Mac Fuller describes the flow of funds around Barack Obama in an exquisitely documented article. 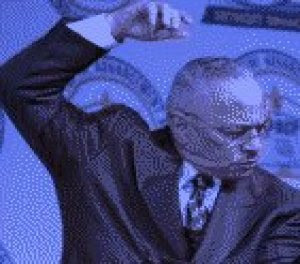 Did you know that the Reverend Jeremiah Wright has received $15 million in federal funds? Yep, that's the same Wright who accompanied Nation of Islam chief Louis Farrakhan on a trip to Libya (and the Pan Am 103 mastermind Muammar Gaddafi), published Hamas propaganda in his newsletter and espoused racially divisive, anti-American rhetoric for decades. All the while, he was collecting millions in taxpayer funds from "G*dd**n America, the USKKK of A" (his words).

Unsettling to say the least. Yes sir, read the whole thing.
at 6:21 AM
Email ThisBlogThis!Share to TwitterShare to FacebookShare to Pinterest
Labels: Crime, Democrats, Economy, Obama