Instapundit: The MSM fix is in


Not exactly a scoop, but interesting nonetheless. Glenn Reynolds:

A READER AT A MAJOR NEWSROOM EMAILS: "Off the record, every suspicion you have about MSM being in the tank for O is true. We have a team of 4 people going thru dumpsters in Alaska and 4 in arizona. Not a single one looking into Acorn, Ayers or Freddiemae. Editor refuses to publish anything that would jeopardize election for O, and betting you dollars to donuts same is true at NYT, others. People cheer when CNN or NBC run another Palin-mocking but raising any reasonable inquiry into obama is derided or flat out ignored. The fix is in, and its working." I asked permission to reprint without attribution and it was granted.

UPDATE: The Anchoress hears similar things. And reader Eric Schubert: "The Edwards debacle was proof enough of where the heart of the MSM lies, and lack of curiousity of the press about Edwards probably cost Hillary the nomination. And that shameful episode offers a warning to the MSM. What if Obama does have a skeleton in his closet (such as a shady deal or outright bribe) that is revealed after he wins the election? While the chance of this scenario is remote, imagine the backlash against the MSM if it could be shown that a reasonable investigation by the MSM would have easily revealed this secret to the public prior to the election?"

ANOTHER UPDATE: Rand Simberg isn't so sure: "Where was the backlash against this about Bill Clinton in 1992? They just seem to continue to get away with it." Well, yes and no. Their reputation and readership/viewership keep falling. And layoffs keep happening. I think they're willing to pull out all the stops because they realize this is the last election where they have a chance at swinging things this way. No point saving your credibility for the future when you don't have a future, I guess . . . . 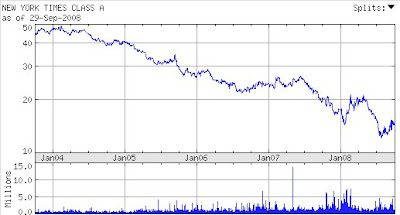 You know, even after a tough day, nothing lifts my spirits like this chart!
at 8:30 PM
Email ThisBlogThis!Share to TwitterShare to FacebookShare to Pinterest
Labels: Democrats, MSM, Obama