Obama leaves the No Spin Zone dizzy and battered

Holy False Prophet!... This was awful!
Barack Obama went into the No Spin Zone and came out battered and bloody tonight.
This interview with Bill O'Reilly was a DISASTER! 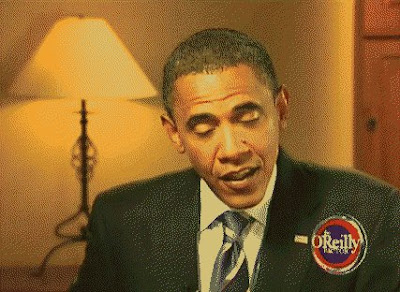 Obama had nothing -- He could not defend or explain his associations with terrorists, racists, and Leftist nutjobs.

He couldn't defend his decision to appease the Daily Kooks.

He compared Sean Hannity and FOX News to the vile nutroots radicals.

He could not name one example where FOX News smeared him.

He could not name one conservative friend.

Obama was so bad that O'Reilly started laughing.

Maybe it would help if the Obama campaign questioned John McCain's honor. Oops. I guess they already did that.

The Obama campaign took its most personal shot ever at Sen. John McCain (R-Ariz.) on Tuesday evening, questioning his honor over a claim in a new TV ad that the Democrat calls "perverse." ...The issue was a new McCain advertisement belittling Obama's record on education, and accusing him of supporting sex education for kindergartners.

...Bill Burton, Obama's press secretary, responded in a statement: “It is shameful and downright perverse for the McCain campaign to use a bill that was written to protect young children from sexual predators as a recycled and discredited political attack against a father of two young girls – a position that his friend Mitt Romney also holds. Last week, John McCain told Time magazine he couldn't define what honor was. Now we know why."

In a talk at Planned Parenthood Obama confirmed his support for sex education for kindergarteners. Kindergarteners?
at 6:24 AM
Email ThisBlogThis!Share to TwitterShare to FacebookShare to Pinterest
Labels: MSM, Obama