How much damage can an assclown do in one minute?


Note: I think "assclown" is the term Nancy Pelosi prefers. Anyhow, I'm thinking the answer is about $700 billion.

Oh, and I found the following headline in CNN's dumpster: Pelosi's uplifting speech unites Congress behind the Bailout. 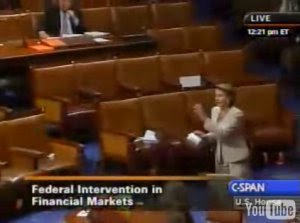 The transcript of Pelosi's speech -- which blamed the mortgage meltdown on Bush, Rethuglicans, Cheney, Rove, Reagan, Sarah Palin, radio talk-show hosts, bible-wielding Pennsylvanians and Walker Texas Ranger -- is something for the ages. It was as ill-timed and as dishonest a speech as has ever been given in the halls of Congress.

Do you think Barney Frank regrets giving up that one minute of time to Madame Speaker? Because that's all it took for Pelosi to torch a verbal agreement in a manner similar to Genghis Kahn's rampage through the city of Balkh (which was destroyed it in the year 1221 and "has not fully recovered from the damage to this day").

Here's the transcript. You can read between the lines. Literally.

SPEAKER PELOSI: Madam Speaker, when was the last time someone asked you for $700 billion?

Roughly the same time I asked someone to give me $18 grand, which is the amount Pelosi accepted in donations from Fannie and Freddie last year -- more than any other single person.

It is a number that is staggering, but tells us only the costs of the Bush Administration's failed economic policies-policies built on budgetary recklessness, on an anything goes mentality, with no regulation, no supervision, and no discipline in the system.

Correct. We know it didn't have anything to do with Clinton operatives Franklin Raines, Jamie Gorelick, Jim Johnson and others instigating an accounting fraud at Fannie Mae while sucking out $200 million in salaries. Or Barney Frank, Chris Dodd, Maxine Waters and a host of other Democratic Congressional muckety-mucks who blocked every attempt at reform. Or Democratic front-group ACORN's phony allegations of redlining that forced banks to underwrite ever riskier loans. We know the meltdown had nothing to do with any of those things!

Democrats believe in the free market, which can and does create jobs, wealth, and capital, but left to its own devices it has created chaos. 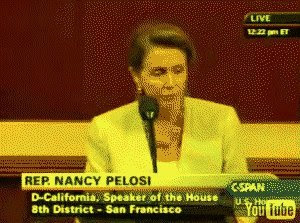 That chaos is the dismal picture painted by Treasury Secretary Paulson and Federal Reserve Chairman Bernanke a week and a half ago in the Capitol. As they pointed out, we confront a crisis of historic magnitude that has the ability to do serious injury not simply to our economy, but to the American people: not just to Wall Street, but to everyday Americans on Main Street.

It is our responsibility today, to help avert that catastrophic outcome.

Kinda like how "Great Society" helped win the war on poverty. That was a big Democratic responsiblity that worked out swimmingly!

Let us be clear: This is a crisis caused on Wall Street. But it is a crisis that reaches to Main Street in every city and town of the United States. 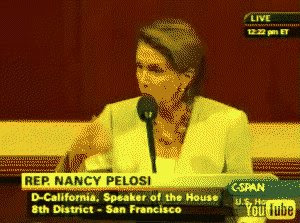 It is a crisis that freezes credit, causes families to lose their homes, cripples small businesses, and makes it harder to find jobs.

It is a crisis that never had to happen. It is now the duty of every Member of this body to recognize that the failure to act responsibly, with full protections for the American taxpayer, would compound the damage already done to the financial security of millions of American families.

Over the past several days, we have worked with our Republican colleagues to fashion an alternative to the original plan of the Bush Administration.

I must recognize the outstanding leadership provided by Chairman Barney Frank, whose enormous intellectual and strategic abilities have never before been so urgently needed, or so widely admired.

Wait a second! Is that the same Barney Frank who fought off the Bush administration's two dozen attempts at reining in Fannie and Freddie saying "I think it is clear that Fannie Mae and Freddie Mac are sufficiently secure so they are in no great danger... I don't think we face a crisis; I don't think that we have an impending disaster. ...Fannie Mae and Freddie Mac do very good work, and they are not endangering the fiscal health of this country... I don't see any financial crisis.

Why, yes. I think that is the same Barney Frank! Well done, B!

I also want to recognize Rahm Emanuel, who combined his deep knowledge of financial institutions with his pragmatic policy experience, to resolve key disagreements.

Is that the same Rahm Emanuel who "who served on the board of Freddie Mac and... opposed every reform proposed by the Bush Administration"? The same Rahm who reportedly fast-tracked illegal aliens through the voter registration process to promote vote fraud? And has blind trusts valued at between $6.5 million and $28 million (the hallmark of an honest politician)? That's deep knowledge of financial institutions!

Secretary Paulson deserves credit for working day and night to help reach an agreement and for his flexibility in negotiating changes to his original proposal.

Democrats insisted that legislation responding to this crisis must protect the American people and Main Street from the meltdown on Wall Street. 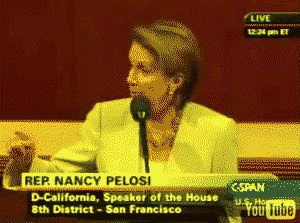 The American people did not decide to dangerously weaken our regulatory and oversight policies. They did not make unwise and risky financial deals. They did not jeopardize the economic security of the nation. And they must not pay the cost of this emergency recovery and stabilization bill.

So we insisted that this bill contain several key provisions:

This legislation must contain independent and ongoing oversight to ensure that the recovery program is managed with full transparency and strict accountability.

Is that kind of like the oversight that Barney Frank, Maxine Waters, David Scott, Gregory Meeks, Franklin Raines and a host of other Democrats fought tooth and nail for the last eight years? That kind of oversight?

The legislation must do everything possible to allow as many people to stay in their homes rather than face foreclosure.

The corporate CEOs whose companies will benefit from the public's participation in this recovery must not benefit by exorbitant salaries and golden parachute retirement bonuses.

Say, CEOs like Franklin Raines ($90 million salary) and Jim Johnson ($21 million) who drove Fannie Mae into the ground while cooking the books to make their bonus numbers? And then took jobs advising Obama on housing? Those kind of CEOs?

Our message to Wall Street is this: the party is over. The era of golden parachutes for high-flying Wall Street operators is over. No longer will the U.S. taxpayer bailout the recklessness of Wall Street.

Great. But when do we get to stop bailing out the criminals and Democrats (but I repeat myself) who raped and pillaged Fannie Mae in the name of "economic fairness"? Like Barney ("I don't see any financial crisis") Frank?

The taxpayers who bear the risk in this recovery must share in the upside as the economy recovers.

Do we get to share in the profits with the crooks at ACORN? Those guys are really good at paying for votes with crack cocaine, making up names of voters, cajoling the dead to vote, and convincing illegal aliens to register.

And should this program not pay for itself, the financial institutions that benefited, not the taxpayers, must bear responsibility for making up the difference.

These were the Democratic demands to safeguard the American taxpayer, to help the economy recover, and to impose tough accountability as a central component of this recovery effort.

Why start now? You could probably get away with a few more years of ripping off taxpayers just like Franklin Raines, Jamie Gorelick and Jim Johnson did.

This legislation is not the end of congressional activity on this crisis. Over the course of the next few weeks, we will continue to hold investigative and oversight hearings to find out how the crisis developed, where mistakes were made, and how the recovery must be managed to protect the middle class and the American taxpayer.

Yes. We're all eagerly awaiting the investigation into the root cause of the crisis.

With passage of this legislation today, we can begin the difficult job of turning our economy around, of helping those who depend on a growing economy and stable financial institutions for a secure retirement, for the education of their children, for jobs and small business credit.

I guess we'll have to take a raincheck on the Tang, Mattie. I mean, Nancy.

Today we must act for those Americans, for Main Street, and we must act now, with the bipartisan spirit of cooperation which allowed us to fashion this legislation. 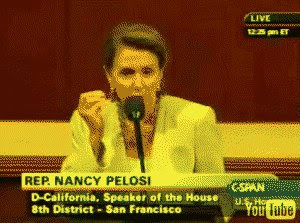 This not enough. We are also working to restore our nation's economic strength by passing a new economic recovery stimulus package- a robust, job creating bill-that will help Americans struggling with high prices, get our economy back on track, and renew the American Dream. 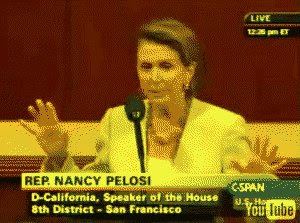 Today, we will act to avert this crisis, but informed by our experience of the past eight years with the failed economic leadership that has left us left capable of meeting the challenges of the future.

We choose a different path. In the new year, with a new Congress and a new president, we will break free with a failed past and take America in a New Direction to a better future.

The only "new direction" you're gonna get, honey, is a AAA TripTik for your ride back to Frisco after your ass gets fired.

Accountability. Back. To. Congress!

This ignorant, hyper-partisan assclown needs to do all Americans a favor and resign. Now.

Related: Swamp Politics: Bailout sunk by Pelosi speech ("Pelosi, the House's top Democrat, outraged Republican members of their conference who might have been on the fence before her speech. By her words , she pushed them to vote against the legislation.")
Linked by: Gateway Pundit, Pax Parabellum and Take our country back!. Thanks!
at 11:07 PM
Email ThisBlogThis!Share to TwitterShare to FacebookShare to Pinterest
Labels: Democrats, Dodd, Frank, Obama, Pelosi