Many bloggers use Sitemeter, a service that offered simple, useful traffic reports. Even the free service, which I used, was pretty good. I'm using the past tense because the site is down after a project debacle worthy of a systems development case study. 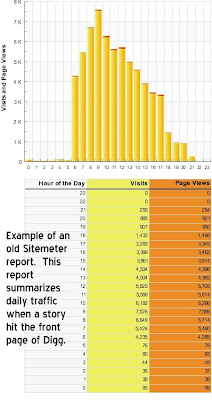 I suppose Sitemeter thought they were competing with a high-end reporting service like Google Analytics. In doing so, they created a new version of the site. It's a montrosity and a usability nightmare: heavy on Flash and nearly devoid of plain old HTML. Using the new version, I could never even find referrals (how users got to my sites) other than through a bulk download of a CSV file into Excel.

The old site made the reports simple and, more importantly, accessible. You could get the last 100 referrals without even logging in, if so configured. I could easily see who was hitting my site from my BlackBerry using a bookmarked URL.

The new site requires a login and, worse, to get any reporting requires the user to download a massive Flash file. On a broadband connection, it took five or ten seconds, depending upon the load on the server, I suppose. Once the Flash application has loaded, the user's presented with a well nigh inscrutable interface that makes psychoanalyzing Michael Moore look like child's play by comparison.

The only positive news for bloggers is that the feedback to Sitemeter has been so overwhelmingly negative, they've decided to rollback to the previous version.

Put simply, this is a textbook example of a poorly planned project. You could look at every aspect of the project, from early mockups, to requirements, design, testing, and even migration strategy and find San Andreas-sized faults. I'm not sure which users they vetted the new design with, but my guess it was one guy named Sal who owns an Auto Body shop next door to Sitemeter's office.

Prediction: the rollback will also fail miserably and take at least a day or two. I'll be pleasantly surprised it the old reports are back up by tomorrow morning.

Update: Ann Althouse, Jammie, Say Anything and the Anchoress all have similar reax.
at 6:33 PM
Email ThisBlogThis!Share to TwitterShare to FacebookShare to Pinterest
Labels: eBusiness, Web 2.0