In an apparent, last-ditch effort to salvage some shred of credibility, cable "news" station MSNBC announced that unhinged leftist Keith Olbermann and moronic tingle-boy Chris Matthews will no longer be covering the election. 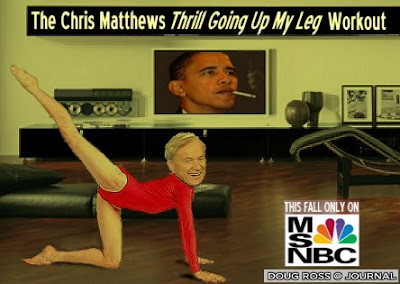 Word has it that the Assclowns Union is up in arms. Charles Johnson provides the details:

The most openly hostile, openly crazed partisan hack on television (and his leg-tingling friend) will no longer be anchoring MSNBC’s election coverage: MSNBC Takes Incendiary Hosts From Anchor Seat.

After months of accusations of political bias and simmering animosity between MSNBC and its parent network NBC, the channel decided over the weekend that the NBC News correspondent and MSNBC host David Gregory would anchor news coverage of the coming debates and election night. Mr. Olbermann and Mr. Matthews will remain as analysts during the coverage.

The change — which comes in the home stretch of the long election cycle — is a direct result of tensions associated with the channel’s perceived shift to the political left.

“The most disappointing shift is to see the partisan attitude move from prime time into what’s supposed to be straight news programming,” said Davidson Goldin, formerly the editorial director of MSNBC and a co-founder of the reputation management firm DolceGoldin.

Olbermann has no business being associated with “news” at all. He’s a disgrace. Hopefully, this is the first step toward tossing him out on his ear.