To it credit, Newsweek has republished Factcheck.org's analysis of the many Palin rumors transiting the series of tubes that make up the Internets.

We've been flooded for the past few days with queries about dubious Internet postings and mass e-mail messages making claims about McCain's running mate, Gov. Palin. We find that many are completely false, or misleading. 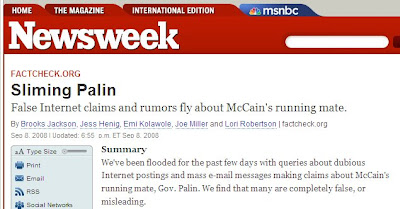 Palin did not cut funding for special needs education in Alaska by 62 percent. She didn't cut it at all. In fact, she tripled per-pupil funding over just three years.

She did not demand that books be banned from the Wasilla library. Some of the books on a widely circulated list were not even in print at the time. The librarian has said Palin asked a "What if?" question, but the librarian continued in her job through most of Palin's first term.

She was never a member of the Alaskan Independence Party, a group that wants Alaskans to vote on whether they wish to secede from the United States. She's been registered as a Republican since May 1982.

Palin never endorsed or supported Pat Buchanan for president. She once wore a Buchanan button as a "courtesy" when he visited Wasilla, but shortly afterward she was appointed to co-chair of the campaign of Steve Forbes in the state.

Palin has not pushed for teaching creationism in Alaska's schools. She has said that students should be allowed to "debate both sides" of the evolution question, but she also said creationism "doesn't have to be part of the curriculum."

Gee, I wonder who could've spread all of this bogus filth? I wonder if their campaign rhymes with Nobama?
at 7:41 PM
Email ThisBlogThis!Share to TwitterShare to FacebookShare to Pinterest
Labels: MSM, Obama, Palin