To make up for the Greenberg fiasco, The Atlantic reissued its cover this month according to Junior Cub Reporter (Level IV) Biff Spackle. 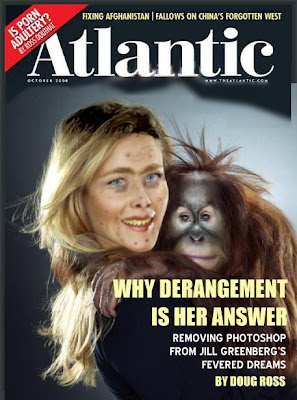 She's a looker, alright. And if the photographer got herself fixed up a bit, she'd be okay too.

"The Vaughan Hannigan photo agency, which has represented the disgraced, excrement-obsessed photoshopper Jill Greenberg, has just dropped her from its client list." - Jeffrey Goldberg @ The Atlantic

Elsewhere, the brilliant and ethical Mark Tucker ["I'm a full-on Obama supporter; I'm a commercial photographer..."] has the real motivation all figured out: What I've Learned from this Greenberg/McCain fiasco

Maybe this was some back-room plot, planned months in advance, to move her out of the doldrums of commercial photography, and into the glamorous world of Fine Art...

This issue's a keeper.
at 8:22 PM
Email ThisBlogThis!Share to TwitterShare to FacebookShare to Pinterest
Labels: Democrats, extremism