MEMRI reports that Saudi clerics have levied the death sentence on Horologists (experts at Horoscopes -- via LGF):

Member of the High Judicial Council in Saudi Arabia, Sheikh Salah Al-Fawzan, has called to kill the hosts of TV horoscope programs on the grounds that they “practice magic.” Al-Fawzan contends that, according to Islam, they are guilty of “a crime whose perpetrators must be put to death by the sword,” and that “it is forbidden to pray over their bodies.”

What this means for John Edwards and his squeeze Rielle Hunter is anyone's guess. 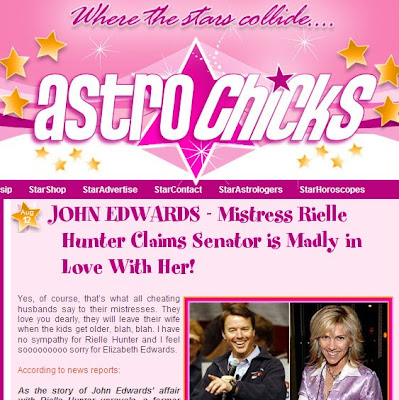 Rielle, of course, is a serious Horologist (careful, punsters!):

Despite someone trying their damnedest to keep confirmed homewrecker Rielle Hunter's website out of the public eye, it was really only a matter of time before the proof of this woman's weirdness surfaced. Entitled "Being Is Free," Hunter's site is chock-full of New Age-isms and talk of the zodiac, chakras, and spiritual healers, none of which granted Hunter enough serenity to resist the temptation of a married man with a dying wife. And while the site is offline, we got a look at the whole mess of it.

Oops! Biff Spackle says she already was in hiding. My bad!
at 7:32 PM
Email ThisBlogThis!Share to TwitterShare to FacebookShare to Pinterest
Labels: Edwards, extremism