In a statement issued shortly after 6 a.m. on the U.S. east coast, Obama said he did not blame McCain, but "I do fault the economic philosophy he subscribes to. It's a philosophy we've had for the last eight years".

However, once we leave Obamaville and reenter the reality vortex, the ties between the Obama campaign, Democrats in general and the Fannie Mae debacle are tighter than Michael Moore's Sansabelt trousers.

OpenSecrets lists the top three politicians in which FNMA "invested" from 1989 to 2008.


All three were Democrats (Dodd was Chairman of the Senate Banking Committee), two were Democratic presidential candidates and Barack Obama received more in his short time in the Senate than all but one politician received in two decades!

Obama has two new ads up, both highlighting McCain advisers who have been employed as lobbyists.

If having a staffer who has worked as a lobbyist makes you "on the take," I wonder what it means when you take more money from companies like Fannie and Freddie than anybody except Chris Dodd. More than, say, 352 other lawmakers, going back to 1989.

Seems like time for a response ad. "When the highly-paid CEOs of Fannie Mae and Freddie Mac felt reformers closing in, they needed a defender. They knew where to send their money. The Banking Committee Chairman Chris Dodd... and Barack Obama. They gave Obama more than $126,000, in less than four years. While Fannie and Freddie was running aground, Dodd, Obama, and Congress looked elsewhere. Ask yourself who can really bring change to Washington, and keep our financial system from running aground."

We need not even mention well-connected Democrat Jamie "The Mistress of Disaster" Gorelick who presided over FNMA during the time it suffered a prior $10 billion accounting scandal while she earned a cool $26 million.

And Senator Obama's friends add some pieces to the puzzle. Remember this story from June 2008? 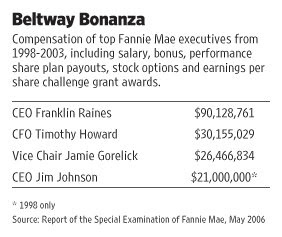 ...One question is whether Messrs. Johnson and Raines were using their position to pad their own incomes that were already fabulous thanks to an implicit taxpayer subsidy. (See the table nearby.) But the bigger issue is whether they steered Fannie policy into giving Mr. Mozilo and Countrywide favorable pricing, which means they helped to facilitate the mortgage boom and bust that Countrywide did so much to promote...

Addressing [FNMA's] too smooth (and fraudulent) reported earnings growth in the late 1990s and early 2000s, Ofheo reported: "Those achievements were illusions deliberately and systematically created by the Enterprise's senior management with the aid of inappropriate accounting and improper earnings management . . . By deliberately and intentionally manipulating accounting to hit earnings targets, senior management maximized the bonuses and other executive compensation they received, at the expense of shareholders."

Barack Obama was so deeply involved with Fannie Mae, he should have proposed marriage.

The crack investigative team at the New York Times will be delving into this egregious mess any minute now.