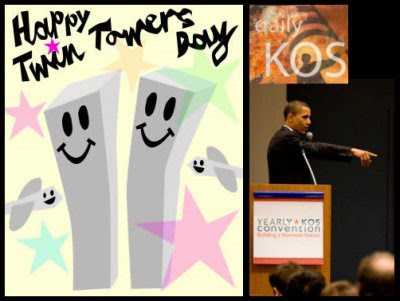 Newsbusters: UPI Charges ABC With Biased 'Double Standard' in Palin Interview ("Charles Gibson of ABC News was out for blood and inherently applied a double-standard compared with the kid gloves George Stephanopoulos used on Democratic presidential nominee Sen. Barack Obama of Illinois on Sunday night... Gibson was out to embarrass Palin and expose her presumed ignorance from the word go. By contrast, when Obama referred to his "Muslim faith" on Sunday and did not correct himself, Stephanopoulos rushed in at once to help him and emphasize that the senator had really meant to say his Christian faith.")

Radarsite: Daily Kos: Beyond Outrage, Beneath Contempt ("All this 9/11 worship is ghoulish and downright silly. Some Brit on b3ta.com is even making fun of our pompous charade." -- Daily Kos.com)

Obama June 30 (up 5 in the Gallup): "I Will Never Question the Patriotism of Others."

Obama Sept. 12 (down 4 in the Gallup): "So, when American workers hear John McCain talking about putting 'Country First,' it's fair to ask –- which country?"

That Ivy League education and those 20 years of spiritual guidance from the Rev. Jeremiah Wright are really paying off as Obama cracks up under pressure. Let's see, calling people pigs. Mocking a guy who is too crippled to type on a keyboard. And questioning the patriotism of a Silver Star honoree.

Maybe it's time the media did some serious looking into the early travels of a fellow who wants to be President, not Vice President of the United States - Barack Obama.

This isn't crazy Obama Muslim Manchurian candidate stuff. Remember the Clintonite who off-handedly dropped the "drug dealer" line during the primaries? Well, anyone can source this below based upon MSM accounts, the news at the time or the few simple links provided. It's certainly enough to make me curious about some things.

By 1980 at Occidental Obama ran partly with a circle of wealthy, drug using Pakistani friends. He traveled to Pakistan between Occidental and Columbia in 1981. That was during the Second Military Era (1977-1988) - Pakistan was under Sharia Law and not the most welcoming to foreign visitors, especially without some graft or connections.

Based upon documented accounts, Obama seems to have also traveled the country-side, not just in the cities. By 1981 Pakistan had become the world's number one supplier of Heroin. Upon his return Obama took up residence with one of the drug using Pakistanis in a run down, presumably drug infested part of NYC in an apartment they couldn't qualify for based on income.

at 10:23 AM
Email ThisBlogThis!Share to TwitterShare to FacebookShare to Pinterest
Labels: Linkfest