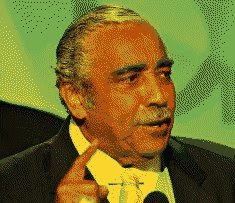 House Speaker Nancy Pelosi swept into power with a promise to "drain the swamp" and combat a "culture of corruption."

It turns out that the swamp has in fact not been drained; it instead continues to rise and new floaters seem to surface every day.

Yesterday Bloomberg reported on the latest turd to pop to the surface of the cesspool.

He goes by the name of Charlie Rangel.

Oh, and there are some income tax violations as well.

...The assertion that Rangel didn't know about the interest- free loan is one of several unusual aspects of his financial and real estate dealings. He said yesterday he failed to report more than $75,000 in rental income from the villa on his federal or state tax returns. The units rent for $500 to $1,000 a night, according to the New York Times.

The revelations come on the heels of a report that Rangel occupies four different rent-controlled apartments -- including one as a campaign office -- and has violated New York City regulations in doing so.

It turns out Rangel just hit the ethics investigation trifecta; his use of congressional stationary to solicit donors for a university center that would carry the Rangel name is also under review.

With that, Rangel joins other Pelosi floaters including:

William "Freezer-burn" Jefferson (D-LA), who was found with $90,000 in marked bills stuck in his freezer at home. Federal agents told a judge the money was part of a $100,000 payoff delivered to Jefferson by an informant in a bribery probe. That probe has already led to guilty pleas by a Kentucky businessman and a former Jefferson aide. The Justice Department been investigating Jefferson's relationship to various international telecommunications agreements.

Allan "Jed Clampett" Mollohan (D-WV), who is a former chair of the House Ethics Committee under federal investigation after the National Legal and Policy Center filed a complaint with the department regarding a bizarre increase in Mollohan's net worth. For 2005, Mollohan and his wife reported assets worth $6.8 million to $25.7 million, up from $116,000 to $315,000 in 1999. His financial disclosure restatements came only after the group's complaint.

John "Porky" Murtha (D-PA), the famed chair of the House Defense Appropriations subcommittee; a charity founded by a longtime Murtha aide has become a "funnel for money" to his campaigns from defense contractors and lobbyists who directly benefit from his decisions. A Taxpayers for Common Sense spokesman noted, "It's a real tangled web between the congressman, the nonprofit, the defense contractors and the lobbyists."

Harry "Land Deal" Reid (D-NV), the Senate Democratic Leader who collected a $1.1 million windfall profit on a Las Vegas land sale even though he hadn't owned the property for at least three years. Reid also did not disclose to Congress an earlier sale in which he transferred his land to a company created by a friend and took a financial stake in that company. The AP learned of the land deal from a former Reid aide concerned that the deal had been "hidden from Congress."

Linked by: One Big Dog. Thanks!
at 10:29 AM
Email ThisBlogThis!Share to TwitterShare to FacebookShare to Pinterest
Labels: Crime, Democrats, Jefferson, Mollohan, Murtha, Pelosi, Rangel, Reid