Understatement must be the Official Google Blog's forte. Its announcement that the Google News Archive now includes some scanned newspapers -- reaching back decades -- is, for a researcher, earth-shattering. 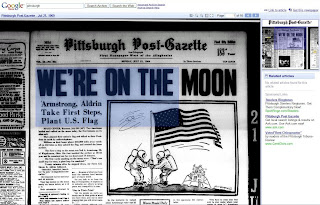 Here's an example. I searched the archive for early 20th century references to two different terms: Hitler and Atom:

Adolf Hitler sat in Berlin giving press interviews as though he were already Chief of State. In Leipzig a congress of pharmacists and physicians turned into a typical Fascist rally. Hitlerite orators, drunk with the sound of their own voices, shouted their program to maintain the superiority of "the Nordic race, the finest flower on the tree of humanity." They mentioned the hanging of Marxists, abolition of trade unions, compulsory sterilization of Jews.

Atomic Power in Ten Years? Early last year news came from Germany, Denmark and France that hit physicists like a punch in the solar plexus. The massive atom of uranium, heaviest of the 92 elements, had been cracked by neutrons (electrically neutral subatomic particles), yielding some 200,000,000 electron-volts of energy per cracked atom (TIME, Feb. 6, 1939). These uranium explosions or "fissions" were most effectively touched off by slow moving neutrons of only one-thirtieth of one electron-volt energy, so that the energy profit was 6,000,000,000 to 1. Prospect of using atomic power-the old dream of sending a ship around the world on the energy in a pint of atoms-seemed much closer than before. Question: how close?

I'm telling you, this is a freaking treasure trove of information.

We're lucky to be alive in this day and age.
at 7:05 PM
Email ThisBlogThis!Share to TwitterShare to FacebookShare to Pinterest
Labels: eBusiness, Web 2.0