Cub Reporter Biff Spackle discovered this document that confirms the report of Barack Obama's 'Truth Squad' (the high-ranking Democratic prosecutors who have threatened to "prosecute critics of Barack Obama"). 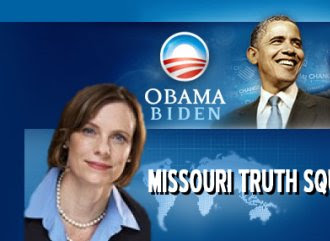 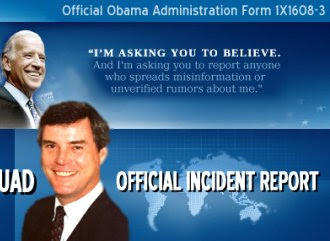 Who are you reporting? (Check all that apply)
My parents
My sibling
Neighbors
My boss or co-worker
A friend or acquaintance
A radio talk-show host
Sean Hannity
Governor Matt Blunt
A wingnut blogger
Other

How did you find about their relationship to these untruths? (Check all that apply)
They sent me a chain email
They sent me a link to a wingnut or Rethuglican website
I happened to notice it on their laptop while sitting behind them on a bus, train or plane
I overheard them whispering
I installed a key-logger on their computer
I read their blog
I installed a network sniffer that monitors all traffic coming into and out of the neighborhood
I went "war-driving" and/or employed wireless monitoring tactics

How long would you recommend that we detain the subject(s)? (Check only one)
Until after the election
Until 2012
Until 2016
Until they graduate from Re-education Camp
Until prisoners start starving in the O'Gulags
Do not set release date

How dangerous is/are the subject(s)? (Check one)
Harmless/crackpot
Mildly annoying
All bark, no bite
Typical Pennsylvanian who clings to guns and religion
Other NRA member
NRA member with concealed-carry permit (a CCW)
Lifetime NRA member with three or more firearms, a CCW, and a Class III permit
Typical Texan
Chuck Norris

Update: Associates of the Truth Squad have successfully shut down the sacrilegious Macsmind website. An alternative version of this notorious Rethuglican propaganda website has popped up here too, but rest assured our Squad is working diligently to bring it down as well.