The tale of Jamie Gorelick just keeps getting better and better


It turns out that Clinton operative Jamie ("The Mistress of Disaster") Gorelick didn't just blind America's intelligence appartus prior to 9/11. And she didn't simply suck down $26 million in salary from Fannie Mae before it imploded. And she didn't only set the stage for the mortgage meltdown. It turns out Ms. Gorelick may have had a teensy weensy conflict-of-interest while managing Fannie.

One of Countrywide's previously undisclosed customers at Fannie was Jamie Gorelick, an influential Democratic Party figure whose $960,000 mortgage refinancing in 2003 was handled through a program reserved for influential figures and friends of Countrywide's chief executive at the time, Angelo Mozilo. Ms. Gorelick was Fannie Mae's vice chairman at the time.

Another Countrywide client was recently ousted Fannie Mae Chief Executive Daniel Mudd, though it isn't clear whether he received special treatment on two $3 million mortgage refinancings he made when he was the company's chief operating officer.

...In June, a Fannie Mae spokesman said the company's conflict-of-interest policy "requires the disclosure of potential conflicts of interest and prohibits acceptance of substantial gifts, including loans with preferential terms, from an organization seeking to do business with the company without prior review and approval by the company." 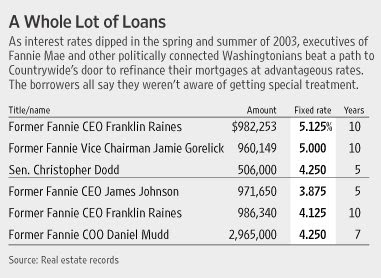 Countrywide was the nation's biggest mortgage firm and was the biggest supplier of mortgage securities to Fannie Mae under an exclusive "strategic agreement" reached by the two firms in July 1999. Under the deal, Countywide agreed to deliver a large portion of Fannie's annual loan volume in exchange for special financing terms.

Together, the two firms took a series of steps in recent years that loosened their underwriting standards, including several reductions in requirements for documentation of borrower incomes that critics say led to a wave of fraud. The U.S. financial system buckled this month under the weight of hundreds of billions in mortgage loans to borrowers who can't pay them back.

While Countrywide was developing a closer working relationship with Fannie Mae, the company also had created a special path to handle loan applications from influential figures. The "Friends of Angelo" program channeled loan applications from celebrities, public figures and sports stars -- often singled out by Mr. Mozilo -- to a department where the borrowers received special treatment, sometimes including lower interest rates and a reduction in fees... Real estate records show that Ms. Gorelick received nearly the same interest rate that Countrywide provided to then-Fannie chief Franklin Raines, who received a similar loan about 40 days before Ms. Gorelick in the spring of 2003.

...Ms. Gorelick is part of a small group of Democratic Party insiders who received "Friends of Angelo" loans. Another previously undisclosed recipient was lobbyist Charles Campion of the firm Dewey Square, which represented Fannie Mae at the time of his June 2003 loan, handled by Mr. Feinberg. Later, in 2006, Mr. Campion became a lobbyist for Countrywide. He declined to be interviewed... ...former Fannie Chief Executive Jim Johnson, who received more than $10 million in preferential loans from Countrywide. The two men managed Walter Mondale's 1984 presidential campaign.

I'm starting to lose count of the number of disastrous and downright outrageous deals this Clinton operative has been involved with. Suffice it to say that if there's any justice in this country, she'll be fitted for an orange jumpsuit momentarily.

What's funny is that even Bill Clinton is blaming Democrats for the mortgage meltdown. Just not himself.
at 9:50 PM
Email ThisBlogThis!Share to TwitterShare to FacebookShare to Pinterest
Labels: Crime, Democrats, Gorelick