The usually stalwart Washington Examiner attempts (and woefully fails) to set the record straight on Dominion Voting Systems, asserting that:

The Homeland Security Department’s Cybersecurity and Infrastructure Security Agency and other groups said on Thursday that “there is no evidence that any voting system deleted or lost votes, changed votes, or was in any way compromised” as President Trump pushes claims that the election was rigged in favor of President-elect Joe Biden...

Like Columbo, I just have one or two more questions. 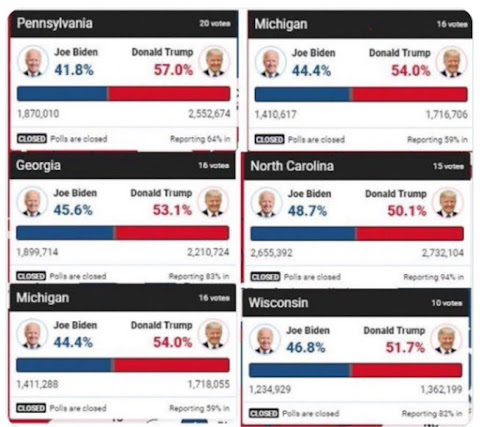 Recall that Antrim County, Michigan's election board reported that 6,000 Trump votes were "accidentally" switched to Biden by a "Dominion" electronic counting system. It was called "human error" or an unpatched device, depending upon who was talking.. Neither bullet point suffices without a full explanation.

In addition, can the Examiner address:

(a) how pervasive said "human error" was across the 30 or so states that Dominion counts votes for. And yes, I ended that sentence with a preposition.

(b) how real-time reports from Dominion's own computer logs appear to reveal that there was a concerted effort to steal votes from Trump.

Imagine watching an NFL game where the first quarter ends with the home team up 14-0. After the commercial break, it's a tie game.

There are reports -- with the datasets open-sourced for public investigation -- that Antrim County's experience was not unique.

Here's a (must-watch) plea from a Serbian who reminds us what happened when their elections were stolen in 2000.