The 2006 Democratic Contract with Al Qaeda 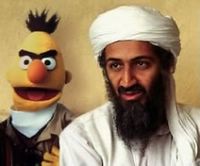 Epiphany: after hearing an EIB broadcast regarding terrorists and their perceived "rights", AJ Strata arrived at a stunning idea. Why not officially enunciate the Democratic position on Al Qaeda with the same clarity of vision and purpose that the GOP provided America in '94?

Thus was born the "2006 Democrat Contract With Al Qaeda." And the amazing aspect of the "contract" is that you can find sound-bites from Democratic leadership clearly advocating each of these positions. Read 'em and weep for the Republic:

The only one he forgot, as one commenter pointed out, is that if an Al Qaeda member does happen to suffer arrest and conviction, the Democrats will work to ensure that the terrorist/felon has a vote in our political system. That would give convicted terrorists the same voting rights as corpses and illegal multi-state voters, which appear to be key Democratic constituencies.
at 6:09 AM
Email ThisBlogThis!Share to TwitterShare to FacebookShare to Pinterest