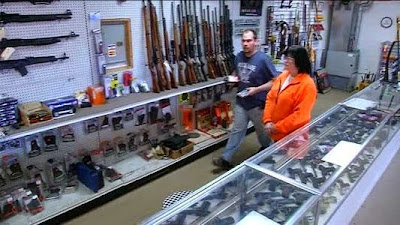 This unit has visited Mr. Palumbo on several occasions, disrupting his business, to see that Mr. Palumbo is compliant with the S.A.F.E. act provisions for licensed gun shops owners.

“The New York State Police told me that my guns were NY S.A.F.E. compliant. The chief of the Medina police told me my rifles were NY S.A.F.E. compliant and in fact purchased one of the guns from my shop.” James D. Tresmond, attorney for the Albion Gun Shop, raised the possibility of entrapment. “My client disclosed to me that he would not have sold these rifles to the general public had they not been approved by the New York Division of State Police”

Meanwhile, a confidential informant from within the state police released an email from New York State Police Division Counsel Kevin Bruen which insinuates that police department itself cannot understand the S.A.F.E. Act itself. The email, which was a response to a state trooper’s inquiry as to whether modified rifles were New York S.A.F.E. compliant. Division Counsel ordered that “a court would have to rule on the legality of these rifles”.

“The New York S.A.F.E. Act is being enforced arbitrarily on a case by case basis,” Tresmond said. “That amounts to unconstitutional vagueness under the Supreme Court’s Morales standard, and the law should be enjoined for that reason alone.”

Mr. Palumbo, concerned that his license to sell firearms in New York may be affected by recent solicitation by the New York State Trooper Narcotics Enforcement Unit, has retained Tresmond Law to represent him in all legal matters concerning any possible investigation or litigation made by the New York State Narcotics Enforcement Unit regarding his business. Mr. Palumbo opened up the Albion Gun Shop in 2012 and it is through this business that he makes his livelihood.

Why would any free man want to live in NY. Move and open your shop in a southern state.

Sympathize with this law abiding citizen. He is merely a bit ahead of the majority of us who have yet to decide about living (or not) on our feet or kneeling and accepting the shackles. We will have to make that decision also, and it will not be as far off as most think. I do believe that the constitution will stand. I would prefer death rather than force younger men who still have children at home to decide. When the crunch comes I believe a majority of our law enforcement will chose America rather than continuing to uphold corrupt police brethren. It is not a war about the 2nd amendment but about freedom. Anyone who believes in a free lunch does not believe in freedom. If it comes down to the choice of being able to loot or the choice of freedom it will not be much of a fight. I hope we choose to be part of the few, the happy band of brethren who make a stand. The real work, the toughest part will fall to those who have to clean up the economic mess afterward when so many will believe that society owes them.