“FBI analysts and Prosecutor 2 told us that former President Barack Obama was one of the 13 individuals with whom Clinton had direct contact using her clintonemail.com account,” explains DOJ inspector Michael Horowitz in Review of Various Actions by the Federal Bureau of Investigation and Department of Justice in Advance of the 2016 Election, the massive report released last week. Despite surprise in some quarters, this was not a new revelation.

Back in early March of 2015, CBS’ Bill Plante asked the president when he learned about Clinton’s private email system. “The same time everybody else learned it through news reports,” he said.  That was not true, and hardly the president’s first strategic lie.

“Mrs. Clinton did not have a government email address during her four-year tenure at the State Department,” readers learned, and “her aides took no actions to have her personal emails preserved on department servers at the time, as required by the Federal Records Act.” Two months earlier, in response to an effort to comply with federal rules, “Mrs. Clinton’s advisers reviewed tens of thousands of pages of her personal emails and decided which ones to turn over to the State Department.” 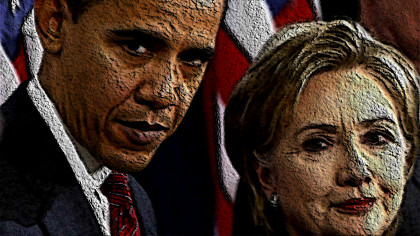 Jason Baron, former director of litigation at the National Archives, told Schmidt, “It is very difficult to conceive of a scenario — short of nuclear winter — where an agency would be justified in allowing its cabinet-level head officer to solely use a private email communications channel for the conduct of government business.” Clinton mouthpiece Nick Merrill explained that Clinton had complied with the  “letter and spirit of the rules.”  White House press secretary Josh Earnest took up the theme in classic style.

“The point that the president was making is not that he didn’t know Secretary Clinton’s email address, he did,” Earnest told reporters. “But he was not aware of the details of how that email address and that server had been set up or how Secretary Clinton and her team were planning to comply with the Federal Records Act.” So unlike Marvin Gaye, he didn’t hear about it through the grapevine.

As Politico revealed, from 2007 to 2015 Clinton set up three private servers. Some “former aide to her husband” set up an Apple unit, a “former IT specialist for Clinton’s 2008 presidential campaign” set up another server in 2009, and in 2013 Platte River Networks set up another, “housed in a data center in New Jersey.” Clinton’s team scrubbed some 30,000 subpoenaed emails from that server and smashed up her mobile devices.

Clinton told the nation the emails she failed to hand over were all about yoga classes, Chelsea’s wedding and such. And as the former first Lady and Secretary of State explained, “I never sent or received any classified material.”

In April, 2016, the FBI showed Clinton aide Huma Abedin an email exchange between Clinton and the president. Abedin “expressed her amazement at the president's use of a pseudonym and asked if she could have a copy of the email.” The State Department “has refused to make public that and other emails Clinton exchanged with Obama,” citing the “presidential communications privilege, a variation of executive privilege, in order to withhold the messages under the Freedom of Information Act.”

FBI boss James Comey knew everything but in July of 2016 he told the nation “no reasonable prosecutor” would bring charges. As Trey Gowdy of the House Oversight Committee told Fox News on Sunday, Comey’s team, including Page and Strzok, “pronounced Hillary Clinton's innocence before her investigation ended.” This was “textbook bias, which is the prejudging of an outcome,” Gowdy said, yet the IG report found that there was no bias. That too should come as no surprise.

IG Michael Horowitz is an Obama appointee, and his massive report is like Comey’s exoneration of Hillary Clinton. It amasses a body of damning evidence, such as Strzok setting out to “stop” Trump, but in the end faults only mistakes, insubordination and such while keeping many identities secret. The report does reveal that POTUS 44, formerly known as Barry Soetoro, knew all about Hillary Clinton’s unsecured email system and used it to communicate with his designated successor.

It is not news that POTUS 44 and Hillary Clinton are prodigious liars but good to have it confirmed by the IG his own self. The report also confirms that Hillary did have classified information on her unsecured server, so current Attorney General Jeff Sessions might file the criminal charges that former AG Loretta Lynch wouldn’t have brought even if the insubordinate James Comey had recommended that she proceed.


Innocent people always smash their old phones so that no one can recover any data.
.
Don't you ?

"Clinton mouthpiece Nick Merrill explained that Clinton had complied with the “letter and spirit of the rules.”

Why of course she did. She sat right down and wrote herself a letter, and spirit-cooked the rules! Followed, of course, by another large glass of Chardonnay; that always soothes the inner demon, don't you know.