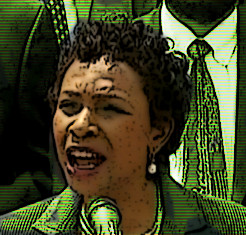 “These allegations bring a new kind of allegation to the whole Awan case. So far we’ve really been dealing with hacking and unauthorized access to networks, possibly ferreting information back to Pakistan,” Bedford said on Fox Business’ “Mornings With Maria.” “Now we actually have people who are implicating a chief of staff for a congresswoman, Yvette Clarke. Chief of staff Shelley Davis.”

Bedford said Davis was implicated by Clarke’s deputy chief of staff Wendy Anderson, who suspected Davis was working with Abid Awan to steal equipment and information from Congress.

“[Anderson] had walked in around December 2015 in the office and she’d found Awan with iPads, iPods, little music players. All this different computer equipment spread around the desk of the Congresswoman’s office. She ordered him out and after a little while told investigators that she thought that he was ordering equipment which came from about 10 percent of the Congresswoman’s budget, to sell with the Chief of staff.”

Clarke didn’t take action against Awan and tried to write off the stolen equipment as missing.

“She wrote off about one-tenth of her budget as missing equipment that seemed like it must have been lost and did not end up firing Awan until Congressional investigators said, ‘Hold on a second. Why is 10 percent of your budget gone on missing equipment? This seems like there could be a procurement fraud,” Bedford continued.

“If there’s actually a ring of people, a chief of staff who are stealing — involved in a thing like this, then Congressmen aren’t going to want that dirty laundry aired,” he concluded. “This would implicate potentially dozens and dozens of Democrats.”