Is the FBI Raiding Whistleblowers’ Homes to Protect Robert Mueller?

Back on October 19, 2017, I raised the question of just how much Special Counsel Robert Mueller and Deputy A.G. Rod Rosenstein actually knew about Hillary Clinton and Uranium One, since it had been reported that the FBI was aware before the deal was approved in 2010 that Russia was engaging in criminal activity to penetrate our nuclear industry and gain access to chunks of our uranium reserves.

Earlier, in July, I called for a criminal investigation into Hillary Clinton's collusion with Russia  to turn over control of 20 percent of our uranium supplies to Russian interests in return for some $145 million in donations to the Clinton Foundation.  It turns out that there was one: an FBI investigation dating back to 2009, with current deputy attorney general Rod Rosenstein and Special Prosecutor Robert Mueller up to their eyeballs in covering up evidence of Hillary's collusion, bordering on treason, with Vladimir Putin's Russia:

Prior to the Obama administration approving the very controversial deal in 2010 giving Russia 20% of America's Uranium, the FBI had evidence that Russian nuclear industry officials were involved in bribery, kickbacks, extortion and money laundering in order to benefit Vladimir Putin, says a report by The Hill[.] 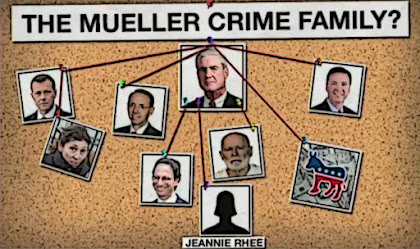 John Solomon and Alison Spann, writing in The Hill, reported on an investigation that suddenly and mysteriously vanished off the radar as Hillary Clinton was seriously contemplating being Obama's successor:

If evidence of bribery, kickbacks, extortion, and money-laundering in the Uranium One affair are not grounds for a special prosecutor assigned to investigate Hillary Clinton, what is?  Rosenstein and Mueller, by their silence on this investigation hidden from Congress and the American people, come off as unindicted coconspirators in Hillary's crimes.  We may soon find just how much Robert Mueller was involved in killing a serious investigation into Uranium One.

Dennis Nathan Cain is a Department of Justice whistleblower who had obtained documents showing how Robert Mueller failed to properly investigate Uranium One and Hillary's involvement in it, actually aiding and abetting a cover-up to protect her presidential ambitions.  As The Daily Wire reports:

In a stunning display, a man who is a recognized government watchdog and had given Justice Department Inspector General Michael Horowitz documents showing federal officials ignored the relationship among Secretary of State Hillary Clinton, the Clinton Foundation, and Rosatom, the Russian company that purchased Uranium One, had his home raided by the FBI, despite the fact that his status was protected by law[.]

Why would the FBI, once headed by a director who had investigated Russia and Uranium One, raid the home of the whistleblower, named Dennis Nathan Cain?  The FBI might have not known that the documents, or which documents, had already been legally turned over by Cain and possibly was trying to seize the documents to protect Mueller himself.  Yet Cain told agents at his door of his legally protected status, and the documents they sought had been turned over to the proper authorities.  They either didn't believe him or did not care.

Mirroring similar thuggish raids involving Trump associates Paul Manafort and Larry Cohen, the raid on Cain's home suggests that Mueller is afraid that Horowitz is actually doing his job and a good one, leading to the exposure of Mueller's own culpability in Hillary's nefarious, dare we say it, collusion with Russia.

Few Americans have heard of Douglas Campbell, another whistleblower and the FBI informant with extensive and deep knowledge of how the Russians of Vladimir Putin used bribery, extortion, and other tools in their bag of tricks to penetrate America's nuclear industry, and how they used Hillary Clinton to gain access to our uranium.  As The Hill's John Solomon reports:

An FBI informant connected to the Uranium One controversy told three congressional committees in a written statement that Moscow routed millions of dollars to America with the expectation it would be used to benefit Bill Clinton's charitable efforts while Secretary of State Hillary Clinton quarterbacked a "reset" in U.S.-Russian relations.

The informant, Douglas Campbell, said in the statement obtained by The Hill that he was told by Russian nuclear executives that Moscow had hired the American lobbying firm APCO Worldwide specifically because it was in position to influence the Obama administration, and more specifically Hillary Clinton.

Campbell added in the testimony that Russian nuclear officials "told me at various times that they expected APCO to apply a portion of the $3 million annual lobbying fee it was receiving from the Russians to provide in-kind support for the Clintons' Global Initiative."

Mueller can look for Trump collusion with Russia, and Rep. Adam Schiff, D-Calif,  can continue his quest for naked pictures of Donald Trump, but here we have real evidence of collusion bordering on treason.  Ironically, the same cast of characters who tried to frame Donald Trump on collusion aided and abetted the cover-up of Russia's moves and Hillary's involvement.  As Fox News analyst Gregg Jarrett notes on the Uranium One scandal:

[W]hy has there been no prosecution of Clinton?  Why did the FBI and the Department of Justice during the Obama administration keep the evidence secret?  Was it concealed to prevent a scandal that would poison Barack Obama's presidency?  Was Hillary Clinton being protected in her quest to succeed him?

The answer may lie with the people who were in charge of the investigation and who knew of its explosive impact.   Who are they?

What's more, Holder was a member of the "Committee on Foreign Investment in the United States" which approved the uranium sale to the Russians in 2010.  Since the vote was unanimous, it appears Holder knowingly and deliberately countenanced a deal that was based on illegal activities and which gave Moscow control of more than 20 percent of America's uranium assets.

Things are about to get interesting.  Go make some popcorn.

It is beginning to look like the only difference between the FBI and the mafia is that the FBI employees have badges, The fact that there are no FBI agents whistleblowers from the Washington DC office is very disappointing. For all we know, they are all traitors who must be punished!

The hammer will fall. Be patient. Trump has the goods and the subpoenas.

Yes, And there is nothing you can do about it.