MORE ANTI-TRUMP JOURNALISTIC FRAUD? Report that Michael Cohen was in Prague Slammed as Garbage by Everyone Involved


The reporters who broke a potentially bombshell story claiming evidence that Michael Cohen visited Prague during the 2016 presidential campaign did not see for themselves some of the underlying intelligence cited in their report, one of the journalists who wrote the story revealed Thursday.

In an interview on MSNBC, Greg Gordon said that he and his McClatchy colleague, Peter Stone, did not physically see cell tower records and intelligence intercepts that they claim placed Cohen in Prague in summer 2016.

Gordon also suggested that the four anonymous sources he and Stone cite in their article also did not see the intelligence for themselves, meaning that the report is based on third-hand information.

“Is there anything that you were able to physically see for yourselves?” MSNBC host Joy Reid asked Gordon.

“I wish we had. We held out for a while for that, and it came a time when we thought we had a critical mass. It is a competitive business,” Gordon said.

When asked if he has seen the intercepts, Gordon responded, “No.” 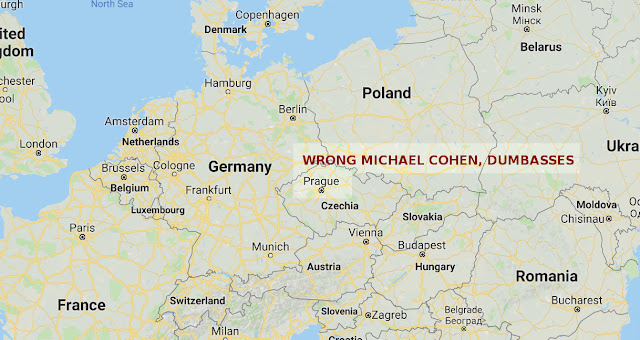 He said that his sources were told that the intercepts exist.

Earlier on Thursday, Gordon and Stone reported that electronic records show that Cohen’s cell phone pinged a tower in Prague in the summer of 2016, around the same time the Steele dossier claims that Cohen was in the European city to meet with a group of Kremlin insiders.

Gordon and Stone also reported that an Eastern European intelligence agency picked up chatter from a Russian government official who claimed that Cohen was in Prague. The information has been provided to special counsel Robert Mueller, McClatchy reported.

If true, the McClatchy report would significantly bolster the dossier, which alleges a massive conspiracy between the Trump campaign and Russian government to influence the 2016 election. According to Christopher Steele, the author of the dossier, Cohen visited Prague to meet with Kremlin officials to arrange payments to Russian hackers. (RELATED: Michael Cohen Disputes Report Claiming Prague Visit)

Cohen has denied the dossier’s claims ever since BuzzFeed published the document on Jan. 10, 2017. He continued publicly denying the report up until late June, around the time that the former Trump fixer began cooperating with federal prosecutors in the various cases against him.

Since then, Cohen’s attorney-turned-adviser, Lanny Davis, has publicly disputed the dossier on Cohen’s behalf.

The McClatchy story has come under intense scrutiny, largely because Cohen broke his silence to deny the report on Twitter. No other news outlets have been able to confirm the report, as well as a similar story published by the same reporters back on April 13.

In that initial story, Gordon and Stone reported that Mueller had received information that placed Cohen in Prague. It is not clear whether that information is the same intelligence identified in Thursday’s report.

“I hear #Prague #CzechRepublic is beautiful in the summertime. I wouldn’t know as I have never been. #Mueller knows everything!” Cohen wrote on Twitter after the McClatchy report appeared.

Gordon avoided responding directly to Cohen’s denial when asked about it on MSNBC.

Gordon was forced to acknowledge that Cohen could have merely stayed silent about the report if it was accurate.

“All I can say to that is we’ll have to see how this sorts out,” Gordon replied.

While Gordon now questions Cohen’s credibility, the same cannot be said for Mueller, who revealed in a court filing on Dec. 7 that Cohen has gone to “significant lengths” to assist the special counsel’s investigation, including by meeting with prosecutors seven times.

Cohen pleaded guilty in the special counsel’s investigation on Nov. 29 to lying to Congress about the extent of his efforts to build a Trump Tower Moscow. Cohen was not charged with lying about the dossier allegations, which he denied during his congressional testimony. The absence of dossier-related charges has been interpreted by many as evidence that Mueller believes Cohen is telling the truth when he denies the dossier’s claims.

The Cohen-in-Prague story proves the President was involved in a massive criminal conspiracy to subvert the election. President Obama, that is.

When Obama let Nellie Ohr and other Clinton Campaign operatives paw through our nation's top secret NSA files, they found this Michael Cohen (art dealer) phone call. It got included in the Steele Dossier without verification. Far from proving President Trump guilty of anything, it in fact proves President Obama guilty of conspiracy and sedition.