"ONE WAY OR ANOTHER": President Fires a Shot Over the Bow of Obstructionist, Pro-Crime Democrats

President Trump is growing impatient over the lack of progress bipartisan negotiators in Congress have been making in talks over funding a desperately needed wall on the nation’s porous multi-state border with Mexico – and this continuing failure makes another government shutdown increasingly likely this Feb. 15.

The GOP-controlled House of Representatives voted 217 to 185 on Dec. 20 for a spending bill with $5.7 billion for the wall. The measure floundered in the Senate and the partial shutdown got underway Dec. 22. The Senate remains in Republican hands but the House is now controlled by Democrats.

Trump engaged in what his handlers characterized as a strategic temporary retreat when he signed a bill Jan. 25 to reopen the government for a three-week period after the longest federal shutdown on record, dropping his demand that Congress appropriate funding for the wall before restoring the government to full functionality until Feb. 15 after which the government could partially shut down again. Trump said he’ll use the time to continue to push lawmakers for money for the wall and is perfectly willing to shut the government down again if he doesn’t secure appropriations for construction of the project.

Trump told Democrats and obstructionist Republicans he’s not interested in playing political word games over the wall, sometimes calling the wall a border structure, other times calling it a barrier or using a different word, the Daily Mail reports. Trump has quipped that Democrats can call the wall “peaches” if they want, so long as lawmakers appropriate funding. 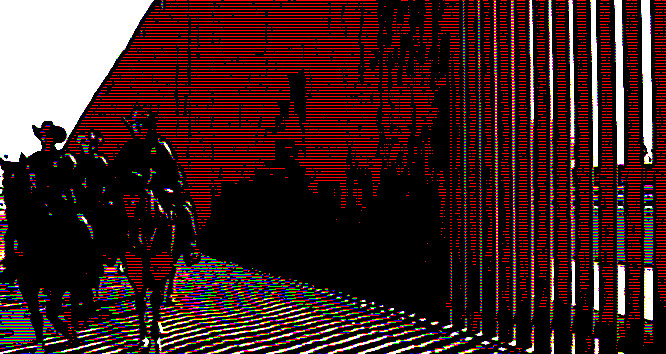 “The Wall is getting done one way or the other!” Trump tweeted. In another tweet he added, “Construction has started and will not stop until it is finished.”

According to the British newspaper:

The U.S. president continued to rage for more than an hour, telling Republicans on a bipartisan panel tasked with coming to a border security arrangement to stop 'wasting their time' on the negotiations with his political opponents. “I’ve got you covered. Wall is already being built, I don’t expect much help!” he proclaimed.

Trump took to Twitter to continue complaining about the negotiators’ failure to accomplish anything.

“Large sections of WALL have already been built with much more either under construction or ready to go. Renovation of existing WALLS is also a very big part of the plan to finally, after many decades, properly Secure Our Border. The Wall is getting done one way or the other!” he wrote.

Although more than a few Democrat lawmakers have said Congress should fund the wall, the Democrats in charge of talks continue to stubbornly refuse to offer any money for the construction project.

The new Democrat majority in the House isn’t even pretending to negotiate in good faith with Trump. They correctly view the wall as an existential threat to their party and despite their endless whining and mockery of the idea of the wall, they know its construction would slow the flow of illegal aliens into the country and impede the growth of the party’s electoral base.

“If you’re asking if there’s any money for a border wall there is none,” Rep. Lucille Roybal-Allard (D-Calif.).

“Within the limited funding available in the bill, we will be fighting for balanced investments across the [Homeland Security] Department’s mission areas. And we will be pushing for a strong, but smart, border security posture, one that does not rely on costly physical barriers,” she said.

Trump railed against the uncooperative lawmakers.

“Republicans on the Homeland Security Committee are wasting their time,” he said. “Democrats, despite all of the evidence, proof and Caravans coming, are not going to give money to build the DESPERATELY needed WALL. I’ve got you covered. Wall is already being built, I don’t expect much help!”

Republicans on Capitol Hill have generally been supportive of the president in the wall funding fight, without being enthusiastic about the prospect of him acting unilaterally to fund the project.

An exception is Sen. Lindsey Graham (R-S.C.) who went on Twitter Thursday to urge Trump to move ahead. “Mr. President, use your powers as Commander in Chief to build wall/barriers – apparently your only option.”

Senate Majority Leader Mitch McConnell (R-Ky.) continues to be politely skeptical at the prospect of the president using emergency powers to obtain wall funding but many of the NeverTrumpers of Conservatism Inc. inside the Beltway have been downright hostile.

One of the more outrageous reactions came from Capital Research Center research director Michael Watson who tweeted that Trump should be impeached for trying to build the wall. “Declaring an emergency to override Congress’s spending authority is an impeachable offense and should be treated as such[,]” he wrote on Twitter.

Watson and a chorus of now-unemployed Weekly Standard staffers are incensed that White House aides have reportedly prepared an executive declaration that gives the president the ability to redirect billions of dollars in military construction and flood-control funds.

Legal experts say the president can call upon the National Emergencies Act, a statute President Gerald Ford signed into law in 1976, to get construction of the wall underway.

President Trump has already invoked the National Emergencies Act three times in his tenure, according to ABC News. President Barack Obama invoked the statute no fewer than 10 times.

The National Emergencies Act gives presidents sweeping authority as well as allowance in federal regulations to declare an “immigration emergency” to deal with an “influx of aliens which either is of such magnitude or exhibits such other characteristics that effective administration of the immigration laws of the United States is beyond the existing capabilities” of immigration authorities “in the affected area or areas.” The basis for such an invocation generally includes the “likelihood of continued growth in the magnitude of the influx,” rising criminal activity, as well as high “demands on law enforcement agencies” and “other circumstances.”

It is becoming increasingly clear that in the current polarized environment using the National Emergencies Act may be the only way the wall gets built.

Trump should declare a state of emergency and warn Democrats that if any federal judge tries to issue an injunction to block it the shutdown will recommence and this time, after 30 days he'll begin a force reduction effectively laying off federal workers and they'll be forced to find jobs in the private sector. Those idled 800,000 workers had no impact on the US economy, they are entirely expendable.