In a wide-ranging interview Friday on “CBS This Morning,” Attorney General William Barr once again expressed his concerns about the mishandling of the FBI investigation into the Trump presidential campaign in 2016.

Without naming names, Barr hinted that former top officials may have abused their power by violating department protocols to launch an unprecedented counterintelligence probe into a political rival.

“These counter-intelligence activities that were directed at the Trump Campaign were not done in the normal course and not through the normal procedures as a far as I can tell,” Barr told CBS News’ legal analyst Jan Crawford. “And a lot of the people who were involved are no longer there.”

Barr added that the questionable activities were “undertaken by a small group at the top,” not rank-and-file FBI agents.

This would refer to former FBI Director James Comey and his high-level deputies including Andrew McCabe, James Baker, Lisa Page, and Peter Strzok.

Both Comey and McCabe verified the official application presented to the Foreign Intelligence Surveillance Court to seek authorization to spy on Trump campaign aide Carter Page; the warrant cited political propaganda and news reports sourced from the so-called Steele dossier as evidence. 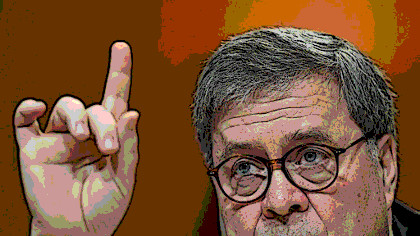 Strzok and Page allegedly were lovers; text messages between the two revealed a deep bias against Donald Trump as well as plans to derail his presidency if he won. (Barr, in the interview, called the text messages “appalling.”)

Baker, the former general counsel, also is the subject of an ongoing criminal investigation for illegally leaking government information.

When pressed to explain why domestic sabotage of a presidential campaign is as damaging as interference by an international foe, Barr compared the internal efforts to those of ancient Roman bodyguards.

“Republics have fallen because of Praetorian Guard mentality where government officials get very arrogant, they identify the national interest with their own political preferences and they feel that anyone who has a different opinion, you know, is somehow an enemy of the state,” he said.

Barr warned that the use of federal powers originally intended to detect foreign enemies but instead used against an American political campaign represents “a serious red line that’s been crossed.”

Earlier this month, Barr appointed U.S. Attorney John Durham to head up an investigation into the origins of the Trump campaign probe. The Justice Department’s Inspector General also is conducting a review of potential FISA abuse related to the surveillance of Page. President Trump recently authorized the declassification of key government documents in order to facilitate the inquiries.

Barr, who served as the attorney general for President George H.W. Bush, takes his mission personally. “From my perspective the idea of resisting a democratically elected president and basically throwing everything at him and you know, really changing the norms on the grounds that we have to stop this president, that is where the shredding of our norms and our institutions is occurring,” Barr said.

And in what should make people like Comey and former CIA Director John Brennan very nervous, Barr confirmed that all intelligence agencies are cooperating.

I am praying that, after the IG and Durham/Barr have completed their investigation, that the participating parties in SPYGATE are PROSECUTED and given the HARSHEST SENTENCES possible so that no American will ever again participate in such a traitorous spying endeavor against another American.

Anonymous @ 9:04 - Benedict Arnold SHOULD have been sufficient warning to any of us but apparently not. Perhaps they should be 'reminded' of Vidkun Quisling..............

Face it-the hildebeast got away with selling uranium to Russia for a Putin connected company. this was shortly after serious donations were made to the clinton foundation as well as bill getting a half mil for a speech. Then look at Benghazi to find out what really happened. Then go back to Whitewater, cattle futures, and the Vince Foster coverup, and you see a criminal for whom calling other crooks (the administration had appointed) to destroy a candidate AND drive him from office if he won. Just another bump in her highway...