More than 2,500 rockets have landed in Israel over the past week. Some Arab Israeli citizens are terrorizing Jewish Israelis. Apparently, as the rockets fall, these citizens are to be Arab Islamic nationalists first, and Israelis last—even if they wisely prefer to live on the Israeli rather than the Palestinian side of Israel’s hated wall.

The usual Hamas sympathizers are promising death to the Jews on social media (so much for the idea that Twitter and Facebook are “shocked, shocked” by impolite expressions of the Trumpian sort).

Iran is always Iran—hubristic and chest-thumping that an obsequious United States will ease sanctions, allowing billions of dollars into the country, and thus empowering Iran to revive former levels of funding to Hezbollah and Hamas, to restructure the terrorist weaponry pipeline to Yemen, and to sanctify the Iran-deal trajectory to an Iranian bomb. Tehran just issued a third-rate video of the Republican Guard destroying the U.S. Capitol, apparently to show the world how it plans to humiliate an appeasing Biden State Department.

But why all this violence now? Of course, experts say the pretexts are cancellations of elections in the West Bank. And there is the need for the corrupt Palestinian Authority to find an enemy to scapegoat other than corrupt rival Hamas. Of course, they say, the Jews are—for the 1,000th time—“desecrating” the Al-Aqsa Mosque, and that the Israeli government is in a mess of disunity, without a unified majority voice. Of course, they say, there is the pretext of a court case over former pre-1947 property in Jerusalem—a bitter, but nevertheless still mostly private matter handled by the courts for years without an intifada.

Yet between 2017 and 2021 there was relatively little violence in Israel and on the West Bank. Whatever our ideologies and politics, we all know the one reason why there is chaos now and not then. And that constant in itself is a primer on the Middle East.

The Trump Administration assumed that whenever there is perceived distance between the United States and democratic Israel, then unsavory players exploit the void and try things they otherwise would not. Israel’s enemies and even neutrals in the area see such a reset as encouragement to move in, on the assumption (correctly held) that American tensions with Israel always reflect weakness and hesitancy to be exploited. 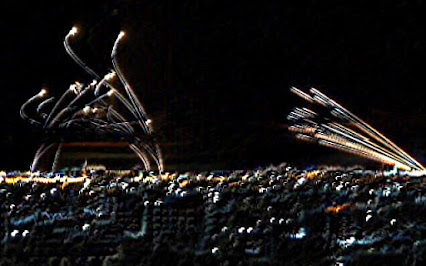 For such a supposedly provocative Trump Administration, peace, not war, followed from its initiatives. It cut off the cash flow to the radical Palestinians, funneled through an anti-American U.N. “refugee” commission.

(Are East Prussians who were thrown out of their homes in Poland not long before the creation of Israel still considered“refugees,” and thus still talk of a “right of return” to “Danzig”? Do the descendants of nearly 1 million Jews ethnically cleansed from the Middle East still shake the keys of their ancestral homes in Iraq, Syria, and Egypt to cameras? And do the Uighurs have their own U.N. pipeline of financial aid? Answer those questions and you can decide whether anti-Israelism is anti-Semitism.)

The Trump Administration also had warned Iran that if the regime survived internal tensions, a collapsed economy, falling oil prices, sanctions, and constant intelligence efforts to disrupt its nuclear industries, it nevertheless would never get a bomb.

Arab regimes knew the dangerous messianic strains of Persian Shiite Khomeinism far better than those in the West. Yet it was oddly a surprise to the West that they were naturally more fearful of Tehran than of Tel Aviv. Or that these regimes were at least eager to use Israel either to destroy the Iranian bomb program or at least to divert Iranian attention to Jews.

In short, the Trump Administration, under the guidance of Secretary of State Mike Pompeo, had begun to craft an effective deterrent Mideast foreign policy of calibrated realism without nation-building interventionism. If Russian mercenaries in Syria moved on U.S. troops, then they were obliterated.

Trump really did lead efforts to “bomb the sh-t” out of ISIS. If Iranian General Qasem Soleimani boldly traveled about Iraq as he was coordinating terrorist cliques in the Middle East, then the United States took him out. At some point, Iran, and its appendages such as Hamas and Hezbollah, were either too broke and weak to sustain their aggressions, or knew they had zero support in Washington, or they feared that they had no idea what the Americans might do on any given day in reaction to their terrorism.

It was within such a four-year matrix that terrorists thought it was better not to attack Israel. But if we were looking to achieve the exact opposite, then calm can become war in five easy steps:

1) Revive Iran. Revive the visions of John Kerry, Barack Obama, and former Vice President Joe Biden. That is, integrate the Khomeinist revolutionary theocracy in Tehran into the family of nations so that it can achieve a “legitimate” regional preeminence in the Middle East. Just as the old Nixon-Kissinger agenda was to see the Shah as the useful Western balancer in the region, so the American Left sees Iran in the same role—but this time around as a revolutionary chaotic regime to check the “right-wing” Israelis and Arab “moderates”, a fact known to Iran.

Promise to lift sanctions that will revive Hezbollah, the Houthis, and Hamas. Assume that Persian Shiite Iran is an oppressed Other, unfairly ostracized largely by democratic Israel and rich Sunni Arab Gulf regimes.

In the new global era of Black Lives Matter and Antifa, Iran also deserves inclusion and equity. Act as if the hazing of American ships in the Persian Gulf, smuggling arms to Yemen, and assassinating Tehran’s enemies inside Iraq are all simply cries from an oppressed heart that need to be contextualized rather than deterred through a disproportionate reaction.

In other words, convince Iran that the United States needs an Iran deal more than does Tehran. Signal there will be a reluctant, though fated pathway to a Shiite bomb, that the Straits of Hormuz will fall under natural Iranian control, and that its Russian and Chinese patrons will inevitably partner to recalibrate Middle East affairs in their own interests.

The goal again is a reassurance to Iran there are few consequences to its aggression because either it is mere anemic belligerence hardly proportionate to any Israeli counterresponse, or perhaps even a righteous reaction to prior oppression.

In sum, Americans are supposed to envision Iran and its West Bank terrorists as a sort of Middle East version of BLM fighting off the systemic racism, colonialism, and imperialism of the Israelis—predictably playing their accustomed role of the Minneapolis police department.

2) Discourage Arab moderates. Ignore or deprecate moderate Arab states that recognize or support, even if stealthily, Israel’s legitimate existence. Undermine the Abraham Accords. “Wink and nod” that those regimes that recognize Israel are—or should be—somehow less authentically Islamic or Arabic in the eyes of the Middle East community. In the American leftist mind, they are “Uncle Anwars.”

With more winks and nods, suggest to Gulf regimes that if they really are worried about their security, they should reach out to Iran in anti-Abraham Accords fashion, as in the old enemy (Iran) of my old/new enemy (Israel) is now my new friend—all in the spirit, of course, of Islamic ecumenism and brotherhood.

Assume that Arab reconciliation with Israel screws up boilerplate leftist theories of pan-Islamic solidarity. Such an intersectional anomaly endangers the foundations of 70 years of the U.S. brokered “peace process” and “multiparty talks.”

In sum, bilateral calm must be much worse than multilateral chaos.

3) Reboot corrupt Palestinian dictatorships. Resuscitate the corrupt Palestinian Authority and Hamas as the “keys” to peace, on the rationale that 5 million Palestinians should have veto power over the foreign policy views of 500 million of the greater Arab Middle East. Return to the idea of the Palestinians as perpetual victims. If not for Israeli oppression, they could foster a prosperous and viable West Bank and Gazan society. Convince the world that Arab Israelis are fourth-class citizens, trapped from their brothers by an earlier version of Trump’s border wall.

Assume that Palestinians alone can enjoy democratic government without the ossified concept of having to hold scheduled elections. Contextualize and thus excuse terrorism, rocket attacks, and assassinations as reactions to systemic racism, prejudice, and bigotry.

Send signals from the American Left and its new congressional heartthrobs that the Palestinians are the natural twins of the woke identity movement at home. Renewed anti-Semitism can be rebooted for the nth time as legitimate anti-Israelism.

Again, the message to the Palestinians is that America sympathizes when you are “forced” to strike back against the aggressor’s “systemic racism.”

4) Adopt globalist moral equivalence. Seek solidarity with the United Nations, the European Union, and the “global community.” Condemn Israel for shooting down rockets and trying to destroy those who are launching them. Such asymmetrical responses are no different, and sometimes morally worse, than sending rockets in the first place. Cannot Israel let just a few rockets fall into downtown Tel-Aviv on the principle of “proportionality”? Why doesn’t the Israeli Iron Dome missile defense system protect the Palestinians from their own malfunctioning and boomeranging missiles?

If a rocket reverses course and falls back on its launchers, then the culprit is Israel for inciting the launchers in the first place. Virtue signal to the international community that the new America of the squad, Elizabeth Warren, and Bernie Sanders is one with the values of the General Assembly and the Palestinian Street.

Start then with the premise that Israel is, in truth, just a white, Western, rich, wall-building, neocolonialist, neoimperialist, and apartheid state that it is in dire need of cancel culture, deplatforming, international ostracism, and military comeuppance. Just as systemic white supremacy is blamed when racist African-Americans males commit anti-Asian hate crimes, so too Zionism is at fault for the deaths of Palestinians, when recklessly launched rockets boomerang on them or they are callously used as human shields by Hamas.

5) Do the exact opposite of the Trump Administration. In Pavlovian fashion, if Trump was evil and coarse, then erase all his evil and coarse policies without exception. Just as border walls, fracking, pipelines, low inflation, and low unemployment are now inherently bad, so too are all of Trump’s policies in the Middle East.

So if the Middle East was “calm,” then ensure it will be the opposite of calm on the principle that NeverTrump is always good. Assume Biden’s asleep-at-the-wheel indifference to tensions and violence are preferable to Trump’s “false” peaceful hiatus. If Trump was fond of the Netanyahu government, then work to ensure that it is out of power and stays so.

Adhere to all five steps and we will likely see a major Middle East war that has started with Hamas rockets, and will accelerate to internal terrorist attacks against Israel, intensifying with Hezbollah launching rockets from Lebanon and Syria, peaking with Iranian missile attacks and global terrorist missions—all sanctioned by Russian and Chinese propaganda as the United States goes mute—and ending when Israel goes medieval on Iran to ensure its own existence.

Is such a scenario alarmist or fantastical?

No more than concluding that printing $5 trillion in new money, while discouraging employment and production, is inflationary.

No more than believing that canceling pipelines, stopping new oil and gas leases on federal lands, promising to end fossil fuels in 20 years, and warning of new taxes and regulations, discourage oil producers from gearing up to meet demand, while encouraging foreign criminal hackers to take out our ability to deliver fossil fuels.

And no more than thinking that defunding the police and skipping arrests and indictments empower the lawbreakers and spike crime.

Historians will later calibrate whether in all these policies their authors were simply incompetent, misguided, and naïve, or else nihilists who equated ensuing chaos and pain as precursors to long-overdue equity and social justice.

The new American Middle East policy is an extension of the new American domestic policy. In both cases, malign naïveté leads to clueless hubris that ends in catastrophe.