INFOGRAPHIC: For Our Covid Response, Why Are They Hiding These Key Stats From Us? [UPDATED]

It took me well over 12 seconds to find the website of the European Centre for Disease Prevention and Control, where weekly Covid updates from each country are tabulated. That level of effort finding the numbers apparently is too difficult for Pro Journalists at the HDNY Times*, CCNN, NBS, Politishmo, Yapoo and the rest. 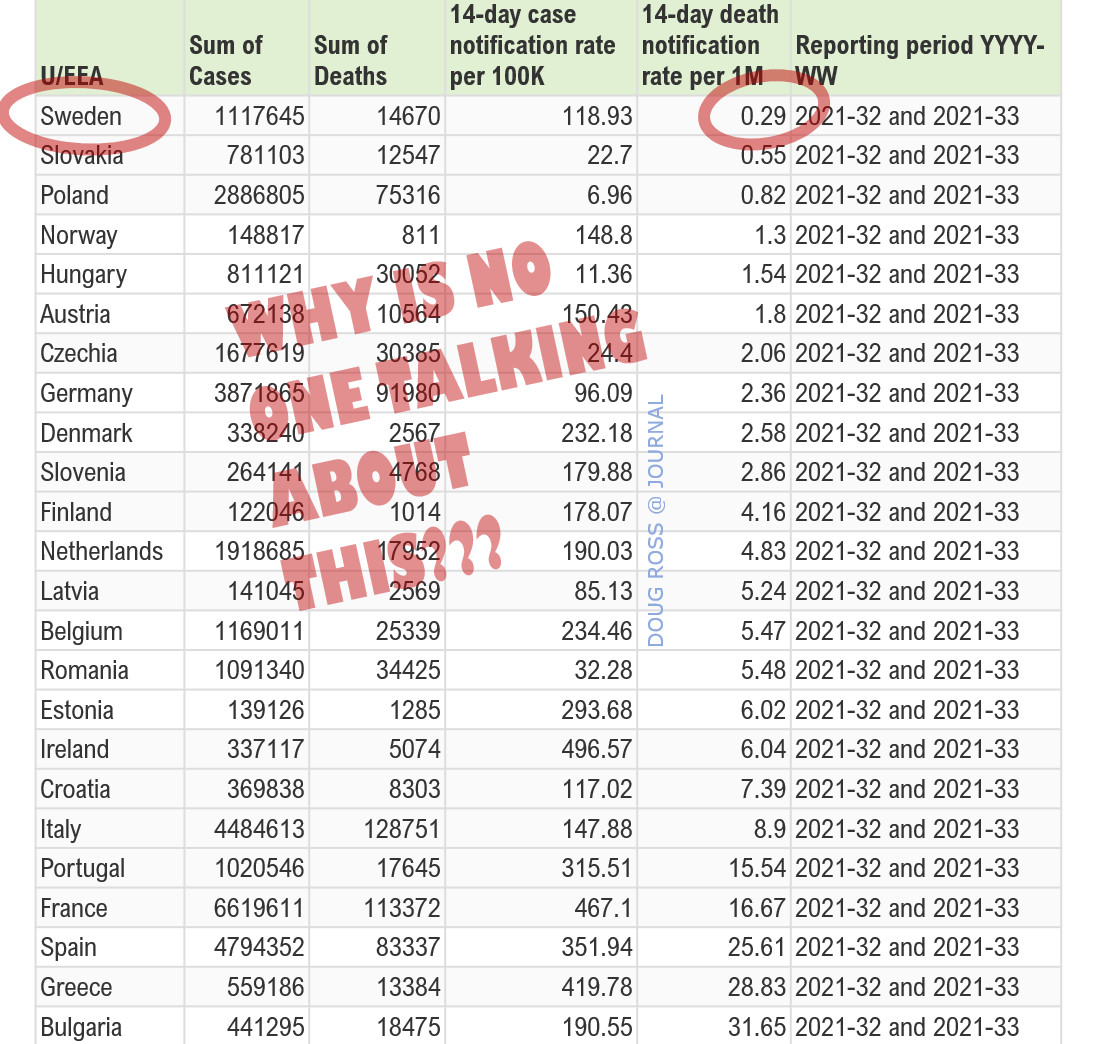 You'd think these numbers would be newsworthy. They're not, at least not to our current gaggle of CCP-funded objective and honest news reporters.

And beyond the censorship, why are dipsh**s excellent journalists like Aria Bendix -- if that is its real name (no idea about the preferred pronouns, so playing it safe) -- offering clickbait like this ("A year and a half after Sweden decided not to lock down, its COVID-19 death rate is up to 10 times higher than its neighbors")?

I think we can all guess why.

Sweden didn't lock down. It didn't issue unconscionable mask mandates. It didn't follow the CCP gameplan. It protected the most vulnerable and its economy.

But for bureaucrats, power is addictive. Power is a drug. And these people are addicts. Because these are the real numbers out of Sweden.

Anything that undermines their control, from Covid restriction resistance to the Constitution, is anathema. I refer, of course, to the entanglement of big media and indestructible federal bureaucracies driven by common interests and ideologies.

You may know this entity as the modern Democrat party.

This hellish union has resulted in a series of clumsy attempts at increasingly oppressive and centralized control of information (e.g., the Hunter Biden laptop story and relentless suppression of Constitutional voices).

We -- all of us -- need to continue to push back in every lawful way against these illegal and un-American dictates.

Because if we can take away anything from the chart above, it's that lockdowns and universal masking (for all but the most vulnerable) appear to be anti-science.

Update: A commenter asked for a longer view than a few weeks. The following is an overview of activity since March, comparing select, larger European countries. I think it confirms my position. Note the light blue line, representing Sweden, consistently at the bottom of the chart.

Hear! hear! It is long past time to stop being polite. If someone utters a scornful comment about masks or COVID shots being "science," correct them immediately and loudly, no matter how public the forum. If someone tries to make you wear a mask or get a COVID shot, even if they threaten your job or your schooling or your grocery shopping, refuse the stupidity. Walk away after letting them know the facts. Take the bitter medicine if you have to but keep your dignity by standing for truth and freedom.

RE: "INFOGRAPHIC: For Our Covid Response, Why Are They Hiding These Key Stats From Us?"

Of course this it good news for Sweden, but what do the results look like for a longer period, say, a couple of months? THAT might even be more impressive.